The second match of the two-Test series against the West Indies will be Sachin Tendulkar's 200th and last. The West Indies series dates were fixed in a hurry to make sure that Tendulkar plays his last Test in India. 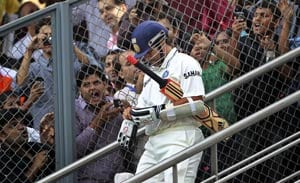 The Board of Control for Cricket in India (BCCI) is likely to consider cricketing great Sachin Tendulkar's wish to play his 200th and farewell Test in his home town Mumbai.

Kolkata and Mumbai were the frontrunners to host Tendulkar's farewell Test but the legendary batsman in a letter to the BCCI has expressed his desire to play the 200th Test in Mumbai. (Read: Sachin Tendulkar's 200th Test venue - Brabourne and Wankhede fight as BCCI plays truant)

"We will consider Tendulkar's request for playing the Test match in Mumbai. We will decide the venue on Tuesday when we meet to finalise the venues of the series," BCCI vice-president Rajeev Shukla, who also heads the board's tours and fixtures committee, told IANS. (Sachin's heart must have told him to quit, says Rahul Dravid)

Shukla also said that BCCI was planning a grand farewell for Tendulkar. (Ramakant Achrekar wants to be in stadium for Sachin's swansong)

The second match of the two-Test series against the West Indies will be Tendulkar's 200th and last. The series was fixed in a hurry to make sure that Tendulkar plays his landmark Test in India. (Sachin tendulkar's retirement, a great leveller!)

The BCCI's tours and fixtures committee is to meet Tuesday.

Asked if the BCCI was delaying the announcement of the venues in view of the MCA elections slated for Oct 18, Shukla said: "That is a wrong perception in the media."

Former BCCI president Sharad Pawar, who is union agriculture minister, in his bid to come back and take on BCCI chief Narayanaswami Srinivasan in next year's election is contesting for the MCA president's post. Pawar is likely to win unanimously.

Pawar, also a former International Cricket Council (ICC) president, has been a vocal critic of Srinivasan's handling of the spot-fixing and betting scandal in the Indian Premier League (IPL).

Pawar had also claimed that such scandals wouldn't have taken place had he been the BCCI chief. Pawar has demanded an investigation by the home ministry in all the 75 matches of the IPL's sixth edition held earlier this year.

Comments
Topics mentioned in this article
Cricket IPL 2013 Sachin Ramesh Tendulkar
Get the latest updates on ICC T20 Worldcup 2022 and CWG 2022 check out the Schedule, Live Score and Medals Tally. Like us on Facebook or follow us on Twitter for more sports updates. You can also download the NDTV Cricket app for Android or iOS.