The poem has been penned by veteran lyricist and poet Javed Akhtar in support of director-actor Farhan Akhtar's Men against Rape and Discrimination (MARD) campaign. 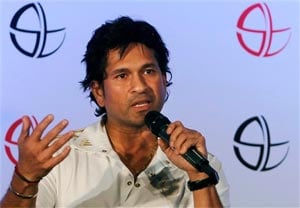 Celebrated Indian cricketer Sachin Tendulkar has gone out to support the cause of women's rights by reciting a Marathi poem for director-actor Farhan Akhtar's Men against Rape and Discrimination (MARD) campaign.

"Master blaster Sachin Tendulkar has taken a stand to bat for a noble cause - discrimination against women. He has collaborated with director-actor Farhan Akhtar to recite a special poem in Marathi for MARD to create awareness among men to respect women and promote gender equality," MARD said in a statement.

"Given Sachin's heroic stature in the nation, his involvement in the campaign will inspire many more to join the noble cause."

The poem has been penned by veteran lyricist and poet Javed Akhtar. Originally penned in Hindi, the lyrics have been translated in different languages like Telugu, Tamil, Punjabi and Marathi. The Telugu version has been recited by Tollywood star Mahesh Babu.

Tendulkar recited the Marathi version of the poem which has been translated by Jitendra Joshi and will be out soon.

Comments
Topics mentioned in this article
Cricket Sachin Ramesh Tendulkar Sreesanth IPL 2013 Adam Gilchrist Kolkata Knight Riders
Get the latest updates on ICC Women's Cricket World Cup 2022 and IPL 2022, check out the Schedule , Live Score and IPL Points Table. Like us on Facebook or follow us on Twitter for more sports updates. You can also download the NDTV Cricket app for Android or iOS.