"Really sad to hear about Balasaheb's demise. His contribution to Maharashtra was immense. It's a terrible loss and he will always be remembered and missed," Tendulkar said in a message on his facebook page. 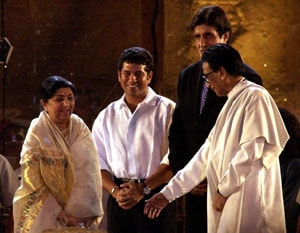 The cricketing fraternity today condoled the sad demise of Bal Thackeray with fellow Maharashtrian Sachin Tendulkar leading the pack, saying the Shiv Sena patriarch will "always be remembered and missed".

Tendulkar said Thackeray's demise is a "terrible loss" for Maharashtra and he would have personally liked to pay his last respects to the Shiv Sena supremo had he not been playing in the first cricket Test against England in Ahmedabad.

"Really sad to hear about Balasaheb's demise. His contribution to Maharashtra was immense. It's a terrible loss and he will always be remembered and missed," Tendulkar said in a message on his facebook page.

"Unfortunately I am in Ahmedabad as I would have liked to pay my last respects personally. My condolences to his family. May God rest his soul in peace," he added.

The 86-year-old cartoonist-turned politician, Thackeray, known for his strong views and speaking his mind, breathed his last at 3.30 PM at his residence 'Matoshree' in suburban Bandra after after having been critically ill for the past few days.

Tendulkar was joined by team-mate Harbhajan Singh in paying tributes to Thackeray.

"Rip to great bala saheb thackeray ji.you wil be missed.very sad to hear the news.condolence to the family.respect," the off-spinner wrote on his twitter page.

"Roaring tiger of Mumbai-Maharashtra is no more..rip balasaheb thackeray," he wrote.

"I would like to offer my deepest condolences to the Thakre Family on the passing away of Shri Bal Thakre.May his soul rest in eternal peace," said Shukla, who is also the vice-president of BCCI.

Comments
Topics mentioned in this article
Cricket RG Sharma Sachin Ramesh Tendulkar IPL 2013 Harbhajan Singh
Get the latest Cricket news, check out the India cricket schedule, Cricket live score . Like us on Facebook or follow us on Twitter for more sports updates. You can also download the NDTV Cricket app for Android or iOS.