Rode the luck while it was there: Kings XI Punjab's David Miller 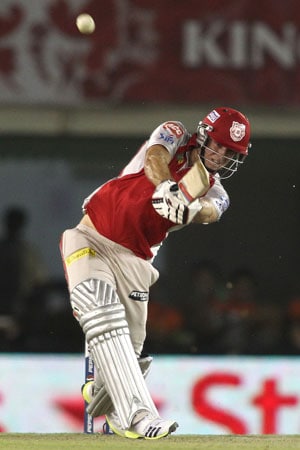 Ecstatic after powering Kings XI Punjab to an improbable IPL win over Royal Challengers Bangalore, young batsman David Miller said a "nice piece of willow" and a lot of luck carried him through to the best knock of his career so far.

The 23-year-old South African struck an unbeaten 38-ball 101 to guide KXIP home while chasing a mammoth target of 190 against the RCB on Monday night.

"I just tried to enjoy myself and play the best cricket I can," he told reporters after the match.

Miller did not forget to thank lady luck after recalling the dropped catch by RCB skipper Virat Kohli when the South African was on 41.

"I was seeing the ball nicely. I missed a few balls to start with, and was lucky to get a few boundaries with that and obviously getting dropped. So, ride the luck when it was there. I was feeling good though," he said.

His knock included eight hits to the fence and seven huge sixes and Miller said he has never struck the ball so well in the past.

Punjab skipper David Hussey, who was also present at the post-match press conference, said the win will lift the team's morale after a string of losses.

"The morale is good...seeing innings like that gives lot of batters a lot of confidence. At the same time, nothing should be taken away from the bowlers, I think they did a superb job," he said.

"Praveen Kumar, upfront, continues to show his class. And seeing a partnership like that (between Miller) with Satish was just brilliant and hopefully does give everybody a little bit of lift (and raises chances of reaching the playoff stage)."

Asked to comment on newcomer Michael Neser, who was brought in for the crucial match, Hussey said, "I don't know, I am not part of the selection committee. I am a foot soldier and given the team sheets."

He, however, defended Neser, who was severely punished by the Bangalore batsmen, saying "I thought Nesser did fine upfront, today."