He may have given up the captaincy due to lack of form, Ricky Ponting has contributed to the Mumbai Indians' dressing room with his wealth of experience as a Test and ODI specialist. 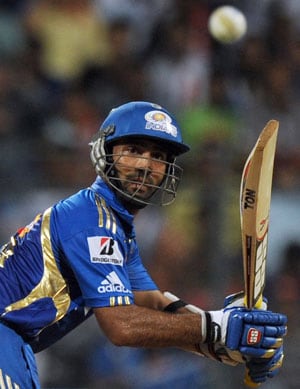 Among the top five batsmen for Mumbai Indians in the Indian Premier League this season, Dinesh Karthik feels Ricky Ponting has had a great influence on his performance. The Australian legend gave up the Mumbai captaincy due to a lack of form, but according to Karthik, has made a significant contribution in the dressing room.

Karthik (388 runs) is Mumbai Indians' second best batsman behind Rohit Sharma (430) and this season has been a lot better than 2012. Careful planning and playing to a situation have been Karthik's route to success. In a team that has hitters like Kieron Pollard, Dwayne Smith and Sachin Tendulkar, Karthik has been happy to play second foil.

"When you know there are some big-hitting batsmen in the middle-order who can tonk the ball a mile, your role gets easier because you just try and get them on strike. When they are not around, you have the license to hit the big ones as well," Karthik told the iplt20.com website.

While most Mumbai Indians players acknowledge Tendulkar's presence in the dressing room inspires them, Karthik feels Ponting's has made a great impact on the team. Karthik has clearly been in awe of Punter and he revealed how Ponting's dressing room tips is making Mumbai Indians a hot contender for the IPL6 crown.

"He (Ponting) is the biggest thing to have happened to Mumbai Indians. He has this aura about him and he brings in a lot of positive energy in the team. Some of the things that he says in team meetings and some of the points he brings to the fore is really hair-raising.

"People don't know about many things happen at the back-end but there's a lot that happens behind closed doors. He is the key reason for us to be so positive and motivated," Karthik said.

Karthik, who is part of the Champions Trophy squad, will surely profit from Ponting's tips when India travel to UK next month. The Tamil Nadu keeper-batsman has learnt a bit of Australian aggression as well.

"The other day I had a doubt and I walked up to him. All he said was that if you see the ball and think you can hit it, you hit it. That, I thought was a very positive input and the one I really liked," said Karthik.

Comments
Topics mentioned in this article
Cricket IPL 2013 Ricky Ponting Dinesh Karthik Mumbai Indians
Get the latest updates on ICC T20 Worldcup 2022 and CWG 2022 check out the Schedule, Live Score and Medals Tally. Like us on Facebook or follow us on Twitter for more sports updates. You can also download the NDTV Cricket app for Android or iOS.