The 21- year old Porbander-born Unadkat has played only one Test without taking a wicket at Centurion in South Africa three years ago. 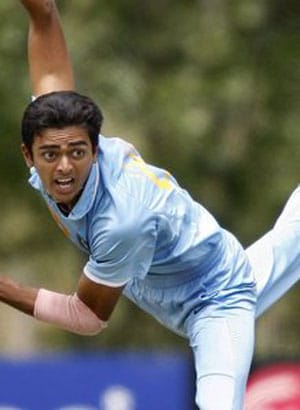 Young left-arm pacer Jaydev Unadkat has impressed Ray Jennings with his performance in the IPL and the chief coach of Royal Challengers Bangalore is confident that the Saurashtra bowler would stage a comeback into the Indian team.

"I think he is going to make a big comeback into Indian cricket in the next 18 months. (He has) a very professional workside. He puts his body on the line when he fields. (He is) a lovely person to work with," said Jennings ahead of RCB's next IPL match against Mumbai Indians here on Saturday.

The 21- year old Porbander-born Unadkat has played only one Test without taking a wicket at Centurion in South Africa three years ago.

Jennings said injured batsman Cheteshwar Pujara, out of cricket action with a broken index finger sustained in the fourth and last Test against Australia last month, was still in the rehab mode and is expected to join RCB in the first week of May.

"Anywhere between first and sixth of May. He is staying in Bangalore and is going to obviously start hitting balls. Once he feels he wants to join the side, we will put him in and he will join us in net practice," said Jennings.

The RCB chief coach credited his bowlers also, apart from Chris Gayle, skipper Virat Kohli and A B de Villiers, for the good position his team finds itself in (12 points from eight matches) mid-way through the league phase of the T20 tournament.

"The media has been speaking about our batting. The media has taken the focus off our bowling. The focus has been about Gayle and Kohli and de Villiers. But look at Vinay Kumar. He had got the purple cap (13 wickets in 8 games) and R P Singh has been up in the top there."