Rajasthan Royals showed once again why the team makes the most of home conditions. 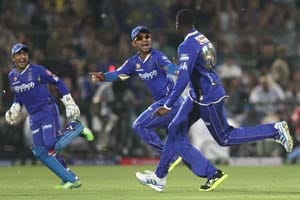 Rajasthan bowlers stuck to their guns to inflict a 19-run defeat on Kolkata. A look at the statistical highlights from the match.

# Rajasthan have recorded their third win in four games against Kolkata at Jaipur.

# Both Rajasthan and Kolkata have won five games each against each other out of eleven played at the IPL (Tied 1).

# Rajasthan Royals have won both their games in the present competition - the second team after Sunrisers Hyderabad to achieve the feat.

# Kolkata's 125 is their lowest total against Rajasthan at the IPL.

# Brad Hodge has extended his record for the highest run-aggregate in Twenty20 to 5325 at an average of 36.47 in 181 games.Â  His tally includes two hundreds and 36 fifties.

# Kallis has registered four golden ducks at the IPL - one each against Mumbai, Delhi, Rajasthan and Chennai.

# Yusuf Pathan has recorded his fourth duck at the IPL.

# Siddharth Trivedi (3/23) has produced his best bowling performance against Kolkata Knight Riders at the IPL.

# Trivedi has been adjudged the Man of the Match for the second time in the IPL.

Comments
Topics mentioned in this article
Cricket IPL 2013 Ricky Ponting Shoaib Akhtar Gautam Gambhir Kevon Cooper Siddharth Trivedi Ravi Bopara Eoin Morgan Kolkata Knight Riders Rajasthan Royals Ajaysinhji D. Jadeja
Get the latest updates on India vs Australia Series, check out the India vs Australia Schedule for 2020-21 and Ind vs Aus live score . Like us on Facebook or follow us on Twitter for more sports updates. You can also download the NDTV Cricket app for Android or iOS.