Rahul Dravid played a captain's knock for Rajasthan while Rahul Sharma and Yuvraj Singh bowled out of their skins for Pune Warriors. At the end of the day though, Aaron Finch and Robin Uthappa were tha gamechangers. 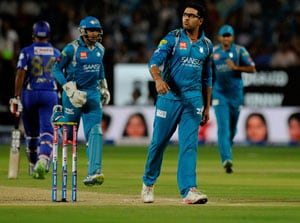 # After earning a dubious distinction of eleven losses in succession (an unwanted IPL record), Pune Warriors have recorded their first win at the IPL.

# Pune Warriors, after losing the first three games to Rajasthan Royals, have recorded their first win against them at the IPL - winning % 25.00.

# Pune have emulated their biggest win in terms of wickets - their first two wins by seven wickets being against Punjab on April 10, 2011 and against Chennai on April 14, 2012.

# Thanks to Pune's win today, Delhi Daredevils remain the only team not to have won a single game in this year's IPL. They are placed at the bottom of the table.

# Rahul Dravid, with 136 runs at an average of 45.33 in three matches, is the top run-scorer for Rajasthan Royals in the present competition.

# Apart from the two fifties by Dravid, no other batsman has recorded a fifty for Rajasthan in the present competition.

# Dravid's eleventh fifty in Twenty20 is his ninth at the IPL.

# Dravid (54 off 48 balls) has posted his fifth fifty for Rajasthan Royals at the IPL.

# Kusal Perera has recorded his third duck in Twenty20.

# Rahul Sharma, with 29 wickets at 21.72 runs apiece in 28 matches, is the top wicket-taker for Pune Warriors at the IPL. No other bowler has captured even 15 wickets for Pune.

# Robin Uthappa and Aaron Finch were involved in a stand of 58 for the first wicket - Pune's highest partnership for any wicket against Rajasthan at the IPL.

# Aaron Finch's innings is the highest by a Pune batsman in three matches at the IPL this year. Finch is the first Pune player to record a fifty this year.

# Finch's 64 off 53 balls is his first fifty in ten innings at the IPL for Delhi, Rajasthan and Pune.

# Finch, for the first time, has recorded three sixes in an IPL innings.

# Finch has become the second Pune batsman to register a fifty in a winning cause. Jesse Ryder had posted two fifties last year - 86 against Delhi and 73 not out against Chennai in Pune's wins.

# Finch has received his first Man of the Match award at the IPL.

# The first 13 matches at the IPL this year has witnessed 102 sixes.

# Eight sixes have been recorded in Pune's innings - the most by them against Rajasthan Royals at the IPL.

# James Faulkner (2/17) has produced his best bowling performance at the IPL.