Omar's Twitter read "Did you really have to take him all the way to Zimbabwe to demoralise him? Wouldn't it have been cheaper to just do it at home". Shashi Tharoor tweeted: "What's the point leading 4-0 if you can't give every member of the touring team a chance to play at least once by reshuffling the deck now. 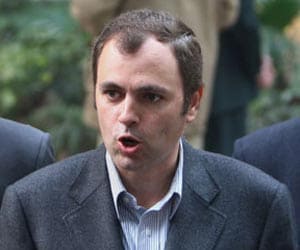 Jammu and Kashmir Chief Minister Omar Abdullah on Saturday lashed out at the BCCI for not fielding all-rounder Parvez Rasool in any of the five ODI games against Zimbabwe.

"Did you really have to take him all the way to Zimbabwe to demoralise him? Wouldn't it have been cheaper to just do it at home?" Omar said in a sarcastic tweet after Rasool was not included in the last game against the minnows.

Union Minister of State for Human Resource Development Shashi Tharoor also expressed his disappointment over Rasool not making it to the playing XI in the final game of the series.

He questioned the rationale of playing all the frontline players when India was leading the series 4-0.

"What's the point leading 4-0 if you can't give every member of the touring team a chance to play at least once by reshuffling the deck now?" he asked.

Omar Abdullah's tweet on Rasool came under criticism in some websites, which prompted the Chief Minister to respond through Twitter.

"Mamata Banerjee can felicitate an IPL team, Govt's can reward medal winners & I'm not supposed to have an opinion about cricket. SAYS WHO??", Omar tweeted.

In another tweet to Shashi Tharoor, Omar said "@ShashiTharoor or you being minister means you surrender the right to a personal opinion about any subject. Anyway grin & bear it :-))

"What amazes me is that people on all these websites have criticised me for having an opinion as if being CM means I shouldn't" he replied to Shashi Tharoor.

Disappointed at Rasool's non-inclusion in the playing XI of Indian cricket team in the ongoing Zimbabwe tour, Omar yesterday urged the BCCI to give him a chance to prove himself.

"Come on BCCI give the young man (Rasool) a chance to prove himself," Omar wrote on his twitter page yesterday.

The Chief Minister, an avid cricket follower, had expressed disappointment that the Jammu and Kashmir cricketer has not been given a game even though India has taken an unassailable lead in five-match the ODI series.

"Really disappointed that Parvez Rasool hasn't been given a game in Zimbabwe," he said.

Rasool is the only member of the 15-member squad who has not seen any action so far. Ajinkya Rahane was warming the bench alongside Rasool but the opening batsman got his chance in today's game.

Rasool shot to fame with a brilliant all-round performance in the Ranji Trophy last season by scoring 594 runs and grabbing 33 wickets.

His selection to national squad was fast-tracked after he took seven wickets in one innings of a tour game against visiting Australians earlier this year.

Comments
Topics mentioned in this article
Cricket Zimbabwe Cricket Team India Cricket Team Parvez Rasool Zimbabwe vs India 2013 IPL 2013 Virat Kohli Golf
Get the latest Cricket news, check out the India cricket schedule, Cricket live score . Like us on Facebook or follow us on Twitter for more sports updates. You can also download the NDTV Cricket app for Android or iOS.