John Wright feels Rohit has donned both hats with equal skill and has done exceedingly well in executing his responsibilities as skipper as well as a batsman. 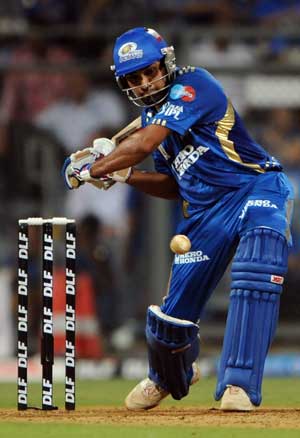 Mumbai Indians' coach John Wright is all praise for the way Rohit Sharma has led the team in the ongoing edition of the Indian Premier League. The fact that the 26-year-old belongs to the city, says Wright, has also helped fans identify with him which is very crucial for a team to enjoy passionate support.

Speaking to iplt20.com, Wright explained the decision to appoint Rohit as captain after Ricky Ponting chose to sit out due to poor form. "It was a joint decision but I think still waters run deep and he lives in Mumbai. It is an obvious advantage to have a home captain, someone who lives in the city. I think the fans identify with it and that is important and so we have someone from Mumbai leading Mumbai Indians which I think is pretty appropriate," said the Kiwi and former India coach.

Mumbai defeated Hyderabad at Wankhede on Monday and are currently placed at the top of the points table with 10 wins from 14 matches.

In leading his team to emphatic wins, Rohit has not let his abilities as a prolific batsman take a beating. "He has done it with the bat right through this tournament. He has stepped into the captaincy role and he looks the part. It is very early days yet but I think he is going to be a very good leader," said Wright. Rohit has hit 487 runs from 14 innings at an average of 54.11 - more than any other in the side. He also has struck four half-centuries.

Comments
Topics mentioned in this article
Cricket IPL 2013 Ricky Ponting Mumbai Indians John Geoffrey Wright RG Sharma
Get the latest updates on ICC T20 Worldcup 2022 and CWG 2022 check out the Schedule, Live Score and Medals Tally. Like us on Facebook or follow us on Twitter for more sports updates. You can also download the NDTV Cricket app for Android or iOS.