In a sensational development, Chavan and his Royals teammate S Sreesanth, an India player, and Ajit Chandila were arrested by Delhi police on spot-fixing charges on Thursday. 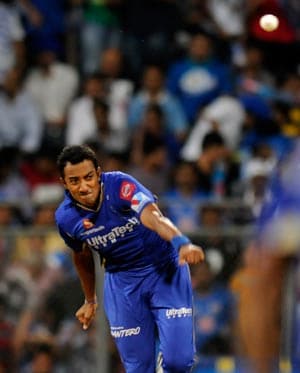 Dismayed at their player Ankit Chavan's alleged spot-fixing role in the Indian Premier League for which the Rajasthan Royals player has been arrested with two other teammates, Mumbai Cricket Association called for severe action against him if found guilty.

"It's a sad thing for Mumbai cricket. We are shocked on hearing this about Ankit Chavan. These boys are getting good amount of money for playing cricket. They should be punished severely if the charges are found correct," MCA's joint secretary Nitin Dalal told PTI.

In a sensational development, Chavan and his Royals teammate S Sreesanth, an India player, and Ajit Chandila were arrested by Delhi police on spot-fixing charges on Thursday.

A special cell of Delhi police picked up Sreesanth in Delhi from his friend's residence, Chavan and Chandila were arrested from the team hotel in Nariman Point here.

It was also learnt from informed sources that left-arm spinner Chavan, who played in last night's game for the Royals against Mumbai Indians at the Wankhede Stadium and failed to take a wicket in three overs while conceding 25 runs, is expected to tie the nuptial knot next month.

Comments
Topics mentioned in this article
IPL 2013 Sachin Ramesh Tendulkar Cricket Sreesanth Ankeet Chavan
Get the latest updates on ICC T20 Worldcup 2022 and CWG 2022 check out the Schedule, Live Score and Medals Tally. Like us on Facebook or follow us on Twitter for more sports updates. You can also download the NDTV Cricket app for Android or iOS.