It was learnt that prior to the game, Khan went to the team hotel to wish the players. 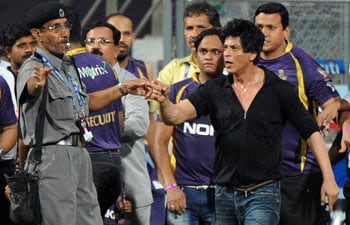 With the Mumbai Cricket Association (MCA) refusing to budge from its stand on the five-year ban imposed on Kolkata Knight Riders principal owner Shah Rukh Khan, the Bollywood actor did not come to the Wankhede Stadium when his team was playing against Mumbai Indians here today.

Indian Premier League chairman Rajeev Shukla tweeted his displeasure and said,Â  " ......it is unfortunate that a team owner is not able to watch an IPL match."

It was learnt that prior to the game, Khan went to the team hotel to wish the players.

The MCA had on Monday asked the local police station to prevent Khan from entering the stadium.

"We wrote a letter to Marine Lines police station asking them not to allow Shah Rukh Khan inside the stadium tomorrow (when Kolkata Knight Riders play Mumbai Indians). This was after the police had asked us to send a letter to that effect," MCA president Ravi Savant said.

Khan was banned for five years from entering the MCA premises, including the Wankhede Stadium, by the association's managing committee, then headed by the late Vilasrao Deshmukh, after he was involved in a fracas with the security staff and officials of the cricket body following KKR's victory over MI on May 16 last year.

The actor had, however, denied any misconduct and said he reacted only after children, including his kids, were "manhandled" by the security staff at the stadium.

Tuesday's match was the first KKR outing in Mumbai after last year's incident.

Earlier in the day, the Bollywood actor found support fromÂ  political parties -- Congress and MNS -- who had asked MCA to revoke the ban.

"Whatever happened (at) that time was wrong. The chapter is closed now. He should be allowed inside Wankhede Stadium. He is not a terrorist who should be denied entry," Raj Thackeray told reporters.

He said such "childishness" should stop and the Bollywood actor be permitted entry.

It was later learnt that Khan had gone to a suburban hotel for a promotional event in the city.

In an email sent Savant, MPCC spokesman Sachin Sawant said since Khan had publicly apologised for the incident, the stadium should not be out of bounds for the superstar.

"After the apology, we feel that it would be in the interest of sports if your esteemed organisation shows true sportsman spirit and allows entry toÂ  Khan. It is not the question of Shah Rukh Khan as an actor, but of any citizen - a ban is not a democratic punishment especially when the person has apologised," Sawant said.

"I request you to kindly reconsider the punishment given to him and allow him entry for today's match," the MPCC spokesman wrote.

However, MCA had said the star had not apologised for his behaviour.

"Action (to ban Shah Rukh Khan) was taken by late Vilasrao Deshmukh (in his capacity as president of MCA), who is no longer with us and was himself a Congressman. When the concerned person (Shah Rukh) himself has not bothered to apologise to MCA, I fail to understand why the Congress is concerned about this matter," Savant told PTI when asked for his reaction.

Comments
Topics mentioned in this article
Cricket Shoaib Akhtar Sourav Ganguly IPL 2013 Kolkata Knight Riders Shah Rukh Khan Ajaysinhji D. Jadeja
Get the latest updates on ICC T20 Worldcup 2022 and CWG 2022 check out the Schedule, Live Score and Medals Tally. Like us on Facebook or follow us on Twitter for more sports updates. You can also download the NDTV Cricket app for Android or iOS.