Bayliss admitted that the poor fielding has also proved fatal for his team in the match against Delhi Daredevils. 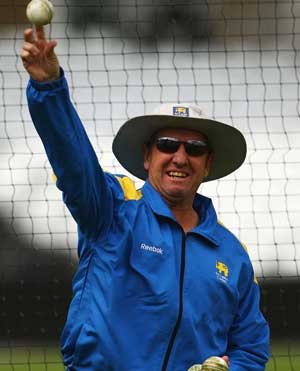 Kolkata Knight Riders coach Trevor Bayliss has come down heavily on his batsmen, saying their failure to post decent totals in the ongoing season of Indian Premier League has put the bowlers and fielders under a lot of pressure.

Defending champions KKR lost their seventh match out of 10 games in the IPL-6 as they went down to Delhi Daredevils last night in a low-scoring affair at the Shaheed Veer Narayan Singh International Stadium in Raipur.

"Batting has not been very good in most of the innings. Low totals put a lot of pressure on bowlers and fielders," Bayliss said at the post-match press conference on Wednesday.

Stressing on the need to improve the team's batting, Bayliss said, "We would try to get back the best players in the top order. We also need to give confidence to the middle order so that the team can score 150 plus, a competitive total in the game."

Bayliss admitted that the poor fielding has also proved fatal for his team in the match against Delhi Daredevils.

"It was a tough game as we needed to take wickets while defending a low total. I was certainly disappointed with dropped catches. Those should have been taken," he said.

Asked what would be KKR's strategy in the remaining six league matches, Bayliss said, "So far it hasn't been the best season for the team. Few more games are left and the strategy will be to score more runs and take more wickets."

Comments
Topics mentioned in this article
Cricket Gautam Gambhir Shoaib Akhtar IPL 2013 Kolkata Knight Riders Ajaysinhji D. Jadeja Trevor Edward Bailey
Get the latest updates on ICC T20 Worldcup 2022 and CWG 2022 check out the Schedule, Live Score and Medals Tally. Like us on Facebook or follow us on Twitter for more sports updates. You can also download the NDTV Cricket app for Android or iOS.