The former Australian batsman said the team has come to Chennai high on confidence after putting up a fighting show against the mighty Mumbai Indians in their previous encounter. 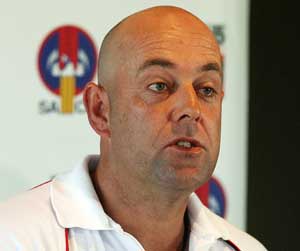 Opener Michael Hussey and skipper Mahendra Singh Dhoni's form with the bat is a cause of concern for Kings XI Punjab coach Darren Lehmann ahead of their IPL game against Chennai Super Kings on Thursday.

Hussey and Dhoni have so far accumulated 450 and 298 runs respectively from nine games each and Lehmann said Kings XI need to "come up with a plan" for the duo as they can take the game away from the opposition with their aggressive brand of cricket.

"Yes, we have (a plan for them), but I am not going to tell you. We have to come up with a plan, which we have for the two," Lehmann told reporters at a pre-match press conference.

"They have so many India international players. We will have to see what we can do tomorrow," he said.

The former Australian batsman said the team has come to Chennai high on confidence after putting up a fighting show against the mighty Mumbai Indians in their previous encounter.

"We should have won the last game. We almost chased down the 176-run target but fell short by just six runs. We should have crossed the line. We have come to Chennai high on confidence. I think our batting in powerplays has been good. We have hit 40-45 runs in few games," he said.

On Adam Gilchrist's chances of leading the side tomorrow, Lehmann said, "It remains to be seen. Dropping him for the last game was a collective decision taken by the team selection committee. It's always a tough decision dropping a great player like Gilchrist and Ponting. But that's a decision we all in the selection committee took."

Comments
Topics mentioned in this article
Cricket IPL 2013 Yuvraj Singh Michael Hussey Darren Lehmann MS Dhoni Suresh Raina Chennai Super Kings Kings XI Punjab
Get the latest updates on India vs South Africa and check out  Schedule, Results and Live Score. Like us on Facebook or follow us on Twitter for more sports updates. You can also download the NDTV Cricket app for Android or iOS.