The unfortunate Sunrisers Hyderabad bowler who bore the brunt on Monday was Thisara Perera, whose third over, the 17th of the innings, was pilloried for 29 runs. 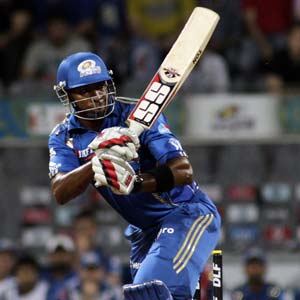 It has been an interesting week for Kieron Pollard. On May 5, against the Chennai Super Kings, Pollard achieved a most dubious hat-trick, dropping Mike Hussey at point off three consecutive deliveries from Mitchell Johnson. For someone who is among the best fielders in the world today, that bordered on the absurd. Immediately after that game, Pollard, it was cruelly said, finally caught something - the flu - and missed the game against the Pune Warriors. Against the Sunrisers Hyderabad on Monday, at a packed Wankhede Stadium, Pollard twice hit hat-tricks of sixes to win a game that Hyderabad had controlled for close to 36 of the eventual 39.3 overs played.

The strategy, when Pollard walked out to bat with 80 needed from 40 balls, was uncomplicated, he revealed. "I guess it was plain for everyone to see. The required rate was 13. At that point it was just a matter of trying to get in and see how deep we could take the game. It was a matter of choosing which bowler to attack and backing yourself and backing your ability," said Pollard, still sniffling from his flu, soon after he had won the game for Mumbai.

The unfortunate bowler who bore the brunt on the day was Thisara Perera, whose third over, the 17th of the innings, was pilloried for 29 runs. But it was always on Pollard's mind that one bowler would have to go for plenty. "The situation dictated itself. If you blocked a couple of balls the required rate went from 13 to 15," said Pollard, who ensured that Perera ended with figures of none for 55 from 3.3 overs. "You still have to play each ball on merit but, at the same time, you have to back yourself to clear the boundaries."

Even with the adrenaline pumping, Pollard refused to be drawn into any speculation over whether the innings was one of the best he had played. "At the end of the day I've played a lot of cricket. It's hard to judge if this is one of my best knocks at this point of time," said Pollard. "What it was, though, was a match-winning innings. That's the most important thing. If I make 10 off 2 balls that helps my team win, it's more important than personal scores and whether it's my best or not. Winning is all that matters to me."

On the field, Pollard's play had a ring of arrogance to it. Against a bowling attack that has been the best defensive one all season, Pollard put together a seven-ball sequence spread over two overs that read 4666666 and killed the chase. Off the field, though, Pollard was humble enough to admit that he did have the slice of luck that anyone needs when they're chasing such a stiff run rate. "When you play against someone they've studied you and they have their plans. On some days they're going to bowl well and you just have to take that in your stride," said Pollard. "Some days you come out at hit the ball sweetly and others you can't get it off the square. I could have gotten caught, anything could have happened, but today was just one of those days."

Tom Moody, the shell-shocked Hyderabad coach, refused to lay the blame on Perera, or Amit Mishra, the two bowlers who suffered the most at the death. "Sometimes you miss your length by a few inches and a yorker becomes a length ball. At the time Cameron White instinctively thought Perera was the right guy to do the job and there was nothing wrong with his call," said Moody. "Mishra has been a fantastic bowler for us and we felt Pollard wasn't always picking him that well. Mishi has been the highest wicket taker in IPL history, so he's obviously got what it takes, but it just didn't come off on the day."

On the day, the crowd at the Wankhede got full value for their money. With Pollard raining sixes, and Mumbai extending their winning streak at home to seven matches, the crowd went wild towards the end of the game. "The crowd has been fantastic here all throughout. Because Sachin Tendulkar lives in Mumbai and plays for Mumbai the crowd always comes out to support us," said Pollard. "Ever since I've been playing for Mumbai I can't remember a time when I've not come to a packed stadium here."

If he keeps hitting it the way he did on Monday, Pollard can rest assured that there won't be too many empty seats in the house wherever he plays.

Comments
Topics mentioned in this article
Cricket IPL 2013 Kieron Pollard Mumbai Indians Sunrisers Hyderabad
Get the latest updates on ICC T20 Worldcup 2022 and CWG 2022 check out the Schedule, Live Score and Medals Tally. Like us on Facebook or follow us on Twitter for more sports updates. You can also download the NDTV Cricket app for Android or iOS.