For team which was defending a small total of 139 against a formidable opponent, it was criminal to drop a player of Hussey calibre on three occasions. 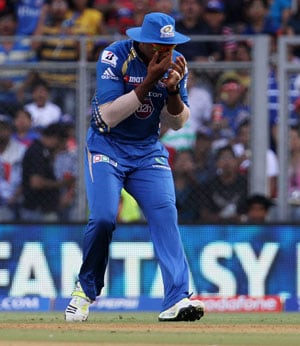 It was a 'hat-trick' which big-bodied West Indian Kieron Pollard would like to forget in a hurry as he dropped three consecutive catches during an IPL match between Mumbai Indians and Chennai Super Kings.

Although, it is not confirmed but perhaps this was first ever instance when a fielder dropped three catches of successive deliveries of the same batsman and that too in the first over of the innings.

Stationed at point, Pollard dropped Michael Hussey thrice off paceman Mitchell Johnson and all the three shots were similar - cut uppishly, going straight to the fielder.

The first one was a hard slash but the second and third one came straight at him and he failed to pouch onto them. He left the field after dropping the third catch as the ball also hit him in the cheekbone.

For team which was defending a small total of 139 against a formidable opponent, it was criminal to drop a player of Hussey calibre on three occasions.

However, he returned and made some redemption by taking a well-judged diving catch at the same point position to see the back of in-form Suresh Raina.

Mumbai Indians skipper kept his faith in his fielder and the West Indian responded well.

The incident has happened when one of Pollard's catches taken earlier in the tournament is being considered one of the best in IPL history.

An air-borne Pollard took a stunning one-handed catch at boundary ropes to remove Shaun Marsh in a match versus Kings XI Punjab.

Pollard could be eventually forgiven for his mistakes as MI stopped the Chennai juggernaut and came out victorious in the match by 60 runs.

Comments
Topics mentioned in this article
Cricket Michael Hussey IPL 2013 Kieron Pollard Chennai Super Kings Mumbai Indians
Get the latest updates on ICC T20 Worldcup 2022 and CWG 2022 check out the Schedule, Live Score and Medals Tally. Like us on Facebook or follow us on Twitter for more sports updates. You can also download the NDTV Cricket app for Android or iOS.