Jacques Kallis puts Kolkata Knight Riders before South Africa. Is this the height of commitment?

South African star all-rounder is upset with his form in the Indian Premier League. He writes that it is unfair to deny a chance to a "performing" cricketer who is better than him to play for South Africa in the Champions Trophy in UK next month. 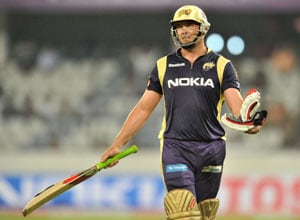 This could easily be the unique story of commitment and loyalty of a top international cricketer. In this year's Indian Premier League, several top-notch men like Ricky Ponting, Adam Gilchrist, Kumar Sangakkara and Angelo Mathews have sacrificed their berths in the playing XI due to a lack of form. But Jacques Kallis has taken this phenomenon ten steps forward. Arguably the world's leading all-rounder, Kallis reveals he has withdrawn from next month's Champions Trophy in the United Kingdom because "his IPL form has been inconsistent!"

South African named their squad for the Champions Trophy on Thursday. One of the biggest surprises was Kallis' omission. Cricket South Africa merely said Kallis opted out due to "personal reasons." On Friday morning, it was as clear as daylight why the 37-year-old pulled out.

Writing in his newspaper column, the 37-year-old Kallis said: "I have always committed myself completely to every team I have ever played for - that's the only way I know ... At my age and stage of career there are many things to consider outside the game and off the field, and I need to plan and be organised in order to play my best cricket. I simply cannot go through the motions or take up a place in a squad unless it has my full attention.

"So it would have been unfair of me to accept a place in the Proteas squad for the Champions Trophy next month. I certainly have not given up my ambition of playing in the 2015 World Cup but, right now, my priority is to finish strongly for KKR and then take some time to reconsider my priorities and consolidate."

Kallis' honest confession only enhances the respect for this amazing cricketer, whose on-field deeds alone wins him a niche in the game's golden books. Through his latest 'decision', Kallis is also leaving a subtle message for one veteran cricket superstar who is struggling for form in the IPL but continues to play every game without worrying much about talent in the reserve bench.

But to give up a place in the national squad because of inconsistent performance in a private T20 tournament is slightly perplexing. After all, Champions Trophy is a 50-over tournament and just tailor-made for classical batsmen like Kallis, who love to pace their innings and play gradually themselves into strength. Does an IPL or a T20 Bash really merit a comparison with a Champions Trophy?

Whatever the case may be, Kallis' decision to opt out from the South African team for the Champions Trophy must be respected. His heart definitely bleeds for KKR. The defending champions have looked completely out of sorts with seven defeats from 10 matches. If it has had any impact on a player, it surely has been on Kallis, who has taken the extreme decision to forego a national team berth, a dream for a cricketer at any stage of his career. Of course if fitness is an issue with Kallis, then it's a different issue. But prima facie, fitness is not the case with him.

Kallis confesses: "A few of the senior players haven't produced the same results as we did last year and, obviously, I include myself..." For a man who in 1998 led South Africa to the ICC Champions Trophy title with two Man of the Match and Player of the Series performances, Jacques Kallis has redefined the word "commitment" and "loyalty" in sport and given the country versus club debate a unique and emotional angle!

Comments
Topics mentioned in this article
Cricket IPL 2013 Jacques Kallis Shoaib Akhtar Waqar Younis Ricky Ponting Kolkata Knight Riders Ajaysinhji D. Jadeja
Get the latest updates on ICC T20 Worldcup 2022 and CWG 2022 check out the Schedule, Live Score and Medals Tally. Like us on Facebook or follow us on Twitter for more sports updates. You can also download the NDTV Cricket app for Android or iOS.