Without Ganguly, Eden gets poor response 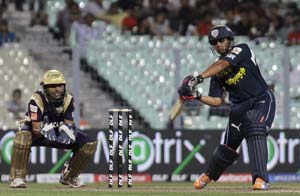 An official figure from KKR team management could not be obtained but according to estimates, the Eden witnessed a poor response with a 20,000-odd crowd turning out at the 63,500-capacity stadium.

With Ganguly being shunned in the latest IPL auctions, the main reason for the most of the crowd entering the stadium through complimentary tickets was Bollywood heart throb Shah Rukh Khan, who is the KKR principal owner.

Asked about the number of tickets being sold, Abhishek, in-charge of KKR ticketing affairs, behaved in a rude manner saying, "We are not supposed to talk to the media. I've told you again, and I don't know Bengali."

He later said that ticket sales have been "good". There were many empty seats in the club houses -- both upper and lower tiers -- even as most of the tickets for the seats there were distributed as complimentary.

Many empty seats were seen in B, F and J blocks and only the upper tier of D block saw a fullhouse.

There was only one refrain from the crowd -- 'We are missing Ganguly'.

59-year-old Somnath Mitra, at the upper tier of club house, said his main reason to come here was to see the renovated Eden Gardens in the new avatar.

"The way KKR treated Ganguly is unacceptable. We hate KKR now. It's quite obvious that Eden will not get a full house.

"Kolkata public is very secular. We are not saying we want Ganguly to be in the team. But the way he was treated was unfair," 58-year-old Soumendra Chakraborty, who also came here with a complimentary club house ticket, said.

"If Dravid, Laxman can play then why can't Ganguly. There was no cricketing reason behind dropping Ganguly. If they did not want him in the team, why was Ganguly put up in auction.

"If he was dropped because of poor performance, we would have understood. But that was not the case," he said.

Management students Tushar Bhattacharya and Sanish Kumar got two complimentary lower tier tickets from his relative and their main reason to come here was to see Shah Rukh Khan.

"We are missing Ganguly. This should not have happened to a successful former India captain. Hope the team does well under Gambhir. We are here to see Shah Rukh," the duo said. "He deserved to get a team. He had done so well last year. Injustice has been done to Sourav," said Bijay Dubey, employed in an MNC.

Jyoti Biswas, a flag seller in front of Eden Gardens, said he got a stock of 150 flags but till 5pm in the evening he had managed to sell only four.

Comments
Topics mentioned in this article
Indian Premier League 2011 Sourav Ganguly IPL 2013 Eden Gardens Cricket
Get the latest updates on SA vs IND 2021-22, check out the Schedule and Live Score . Like us on Facebook or follow us on Twitter for more sports updates. You can also download the NDTV Cricket app for Android or iOS.