Here are the statistical highlights from the match between Delhi Daredevils and Royal Challengers Bangalore: 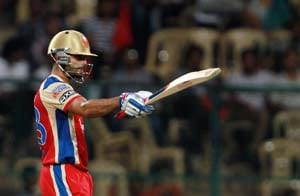 Here are the statistical highlights from the match between Delhi Daredevils and Royal Challengers Bangalore:

# Bangalore have won five and lost five out of eleven played against Delhi at the IPL. Bangalore had won the tied game after one-over eliminator.

# Kohli (99) has posted his highest score at the IPL, eclipsing the 93 not out off 47 balls against Sunrisers Hyderabad at Bangalore on April 9, 2013.

# Kohli's aforesaid innings is his 20th fifty in Twenty20.

# Kohli has recorded his 12th fifty at the IPL - his fourth against Delhi. He is the first batsman to register four fifties against Delhi Daredevils at the IPL.

# Jaydev Unadkat (5/25) has produced his first five-wicket haul in Twenty20.

# Unadkat is the second Bangalore bowler to capture five wickets in an IPL innings. Anil Kumble was the first to accomplish the feat - his figures being 5 for 5 against Rajasthan Royals at Cape Town on April 18, 2009.

# Unadkat has received his second Man of the Match award at the IPL.

# Kohli has become the second batsman to be dismissed at 99 in Twenty20 - the first being Alex Hales for England against the West Indies at Trent Bridge on June 24, 2012.

# The last four overs have produced 77 runs in Bangalore's innings - the most by any team at the IPL.