It was a fine performance by Kolkata Knight Riders' bowlers with Jacques Kallis and Sunil Narine being the stand out performers. 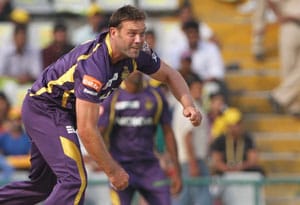 # Kolkata Knight Riders and Royal Challegers Bangalore have won six games each against each other out of twelve contested at the IPL.

# Bangalore's aforesaid total is their second lowest against Kolkata - the lowest being 82 at Bangalore in the first IPL season.

# Chris Gayle has become the first batsman to hit 25 sixes against Kolkata Knight Riders at the IPL. His overall IPL tally is 170, extending his record.

# Gayle is averaging 86.50 against Kolkata Knight Riders while scoring 346 in six innings - the best amongst the players with 300 runs or more against Kolkata at the IPL.

# Narine became the first bowler to take four wickets in an innings twice in the present tournament - once each against Bangalore and Delhi.

# Narine is now the first bowler to claim four wickets or more in an innings four times in the history of the IPL.

# Jacques Kallis (41) has emulated his highest score in the present competition. He had made 41 off 27 balls against Sunrisers Hyderabad at Eden Gardens, Kolkata on April 14.

# Kallis has received his ninth Man of the Match award at the IPL for his all-round performance - 41 + 2/17.