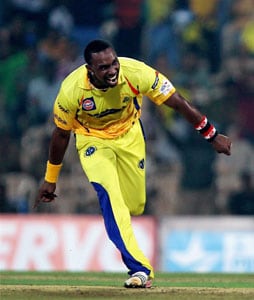 Statistical Highlights from the match between Chennai Super Kings and Delhi Daredevils:

# Chennai Super Kings became the first team to win eleven games out of 15 at the IPL 2013 (lost four).

# Raina is the first player to have played 40 IPL games at Chepauk, Chennai.

# Virender Sehwag has recorded his ninth duck in Twenty20 - his sixth at the IPL.

# Dhoni has taken 13 catches plus two stumpings in 15 matches - the most by a wicketkeeper at the IPL 2013. The said tally is Dhoni's best in an IPL season.

# David Warner, with 408 runs at an average of 37.09 in 15 matches, is the leading run-scorer for Delhi Daredevils in the present competition. No other Delhi player could manage even 300.

# Albie Morkel (73 in 76 matches) and Ravichandran Ashwin (64 in 64 matches) are the only two bowlers to have captured 50 wickets or more for Chennai at the IPL.

# Suresh Raina, with van der Merwe's catch, has become the first fielder to complete 50 catches at the IPL.

# Bravo, in his last 19 IPL games, has claimed atleast a wicket.

# Warner has lost both the IPL games as captain.

Comments
Topics mentioned in this article
Cricket Dwayne Bravo IPL 2013 Delhi Daredevils Chennai Super Kings
Get the latest updates on ICC T20 Worldcup 2022 and CWG 2022 check out the Schedule, Live Score and Medals Tally. Like us on Facebook or follow us on Twitter for more sports updates. You can also download the NDTV Cricket app for Android or iOS.