Warner is the third batsman batsman after Michael Hussey and Rohit Sharma to register four fifties in the present edition of the IPL. 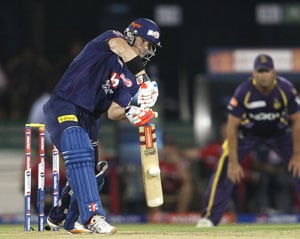 Delhi Daredevils have won two successive games at the IPL 2013 for the first time - both at Shaheed Veer Narayan Singh International Stadium, Raipur - by 15 runs at this venue on April 28 and by 7 wickets against Kolkata Knight Riders on May 1.

Delhi Daredevils have won five and lost six against Kolkata at the IPL - winning % 45.45.

Warner is the third batsman batsman after Michael Hussey and Rohit Sharma to register four fifties in the present edition of the IPL.

Warner has registered two centuries and ten fifties for Delhi Daredevils at the IPL.

Warner has recorded 57 sixes in 49 games for Delhi at the IPL - the second highest, next only to Virender Sehwag's 85 in 73 matches.

Warner has received his fifth Man of the Match award at the IPL.

Virender Sehwag has completed his 3000 runs in Twenty20 - 3006 at an average of 28.35 in 114 matches. The five other Indian players to have accomplished the feat are Suresh Raina, Rohit Sharma, Gautam Gambhir, Virat Kohli and Mahendra Singh Dhoni,

Unmukt Chand (37 off 39 balls) has posted his highest score at the IPL - his first worthwhile contribution for Delhi at the IPL.

Warner and Chand were involved in a third-wicket stand of 95 - Delhi's second highest for any wicket at the IPL 2013, next only to the 151 between Virender Sehwag and Mahela Jayawardene for the first wicket against Mumbai Indians at Delhi on April 21.

The above partnership is Delhi's highest for the third wicket against Kolkata at the IPL.

Mahela Jayawardene has managed 451 runs at an average of 56.37 in twelve games - the highest by any player against Kolkata Knight Riders at the IPL. The next three batsmen with most runs against Kolkata at the IPL are - Suresh Raina (361), Chris Gayle (313) and David Warner (292).

Gautam Gambhir is the fifth batsman to be run out without facing a ball at the IPL 2013, joining Amit Mishra, Manpreet Gony, Jacques Kallis and Ambati Rayudu.

Gambhir has registered his sixth duck at the IPL - his fourth as captain.

In his six innings against Delhi Daredevils, Gambhir is yet to post a fifty at the IPL - his aggregate being 143 at an average of 23.83 with 41 at Eden Gardens, Kolkata on April 3, 2013 as his highest score.

Irfan Pathan has caught Yusuf Pathan for the second time at the IPL - the first instance was off Umesh Yadav (5 off 8 balls - Kolkata vs Delhi at Feroz Shah Kotla, Delhi on April 28, 2011).

Apart from Umesh's four for 24 against Rajasthan Royals at Feroz Shah Kotla, Delhi on April 6, not even a single Delhi bowler has claimed three wickets in an innings in ten matches at the IPL 2013.

Comments
Topics mentioned in this article
Cricket IPL 2013 Shoaib Akhtar Virender Sehwag David Warner Kolkata Knight Riders Delhi Daredevils Ajaysinhji D. Jadeja
Get the latest updates on ICC T20 Worldcup 2022 and CWG 2022 check out the Schedule, Live Score and Medals Tally. Like us on Facebook or follow us on Twitter for more sports updates. You can also download the NDTV Cricket app for Android or iOS.