Sreesanth, who appeared in the advertisement for 'Karunya Lottery', was removed from the celebrities advertisement panel, State Lottery Directorate officials said here. 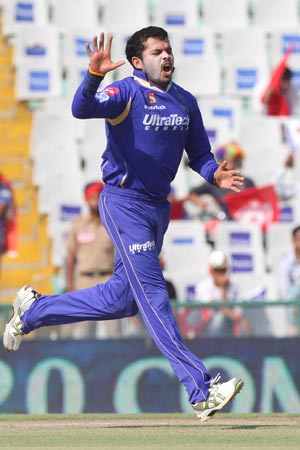 Tainted pacer S Sreesanth, arrested in spot-fixing allegation case, was on Frdiay dropped from the advertisement for the state run Kerala Lottery.

Sreesanth, who appeared in the advertisement for 'Karunya Lottery', was removed from the celebrities advertisement panel, State Lottery Directorate officials said here.

The Rajasthan Royal IPL team player along with two of his teammates were arrested by Delhi police yesterday for alleged spot fixing in three matches in the league.

State Minister for Finance K M Mani had instructed the lottery to remove Sreesanth from the Lottery advertisement in view of his arrest in the alleged spot-fixing case.

The advertisement for the Karunya Lottery, conducted for generating funds for treatment expenses of poor people suffering from serious ailments, features a numberÂ  of celebrities from different walks of life.

Comments
Topics mentioned in this article
Cricket IPL 2013 Sreesanth Rajasthan Royals
Get the latest updates on India vs South Africa and check out  Schedule, Results and Live Score. Like us on Facebook or follow us on Twitter for more sports updates. You can also download the NDTV Cricket app for Android or iOS.