Chandila was one of three Rajasthan Royals cricketers arrested on May 16 for conceding a pre-determined number of runs in exchange for money, the other two being S Sreesanth and Ankeet Chavan. 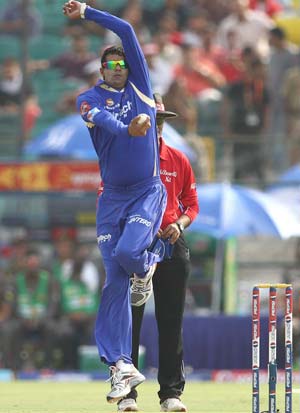 Ajit Chandila was granted bail by a Delhi court after having been arrested on allegations of spot-fixing during IPL VI. Press Trust of India reported that the court has said there are some "missing links" in the prosecution case and the case would have to be re-examined.

The report said Baburao Yadav, a former domestic player, and Deepak Kumar, an alleged bookie, were also granted bail along with Chandila by Dharmesh Sharma, the Additional Sessions Judge, on personal bonds of Rs 50,000 with one surety of like amount each.

"It is very surprising... There are some missing links in the case. I am sending the full file to the Commissioner of Police to let the case be examined...," the judge was quoted as saying.

Chandila had been charged under the stringent Maharashtra Control of Organised Crime Act (MCOCA) by the Delhi Police, but the court said Chandila's connection with the alleged organised syndicate was "too remote".

Chandila was one of three Rajasthan Royals cricketers arrested on May 16 for conceding a pre-determined number of runs in exchange for money, the other two being S Sreesanth and Ankeet Chavan.

Sreesanth and Chavan were both granted bail, but the only time Chandila was let out of custody was in the first week of August to perform the last rites of his deceased brother. Chandila has all along denied all charges and protested his innocence.

The report said the court had fixed October 7 as the date for hearing arguments on the police's plea seeking cancellation of bail granted to Sreesanth, Chavan and 19 other people arrested in connection with the case.

Comments
Topics mentioned in this article
Cricket IPL 2013
Get the latest updates on IPL 2021, IPL Points Table , IPL Schedule 2021 , live score . Like us on Facebook or follow us on Twitter for more sports updates. You can also download the NDTV Cricket app for Android or iOS.