Sawani said the Delhi police has also been apprised of Rajasthan Royals' intention to file a criminal complaint against its three cricketers arrested for spot-fixing. 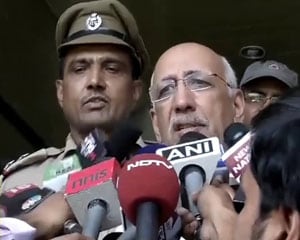 BCCI's anti-corruption unit chief Ravi Sawani today held a meeting with the top Delhi police officials, who are investigating into the spot-fixing scandal that has rocked the Indian Premier League.

Sawani, who has been appointed by the BCCI as commissioner of inquiry to probe spot-fixing allegations, said the Cricket Board has assured the Delhi police of providing all possible assistance in their investigation.

"I had a fruitful meeting with Delhi police Commissioner Neeraj Kumar and other top officials. The BCCI has assured Delhi police of all its co-operation," Sawani told reporters after the meeting.

Sawani said the Delhi police has also been apprised of Rajasthan Royals' intention to file a criminal complaint against its three cricketers arrested for spot-fixing.

Asked about whether the Delhi police investigation is going on beyond the three arrested cricketers, Sawani chose not to react.

"I am not at liberty to discuss anything more with you at this stage," he said.

Sawani said the BCCI has initiated an internal inquiry to probe into the allegations of spot-fixing but refused to set any deadline for the submission of his report.

"We will hold out a separate disciplinary inquiry and once I submit my report to the disciplinary committee, the BCCI will take appropriate action based on my report. I can't give you a definite timeframe. It will take some time to collect all the evidences in this matter," he said.

Sawani also refused to share any further information with the media as it "could affect my inquiry".

"Any information that I have, I cannot share it with the media because it could affect my inquiry," he said.

The meeting between ACSU chief Sawani and Delhi police officals lasted for 15 minutes.

The IPL was dealt a massive blow when a special cell of the Delhi police arrested India pacer S Sreesanth and his Rajasthan Royals teammates - Ajit Chandila and Ankeet Chavan - on Thursday for indulging in spot-fixing in at least three IPL matches as per arrangements with bookies who have underworld connections abroad.

Comments
Topics mentioned in this article
Cricket IPL 2013 MS Dhoni Ajit Chandila Sreesanth Ankeet Chavan
Get the latest updates on IPL 2021, IPL Points Table , IPL Schedule 2021 , live score . Like us on Facebook or follow us on Twitter for more sports updates. You can also download the NDTV Cricket app for Android or iOS.