Arrested Rajasthan Royals player Ajit Chandila has named two more players, both batsmen, who were involved in spot-fixing during the sixth edition of the Indian Premier League, say police sources. 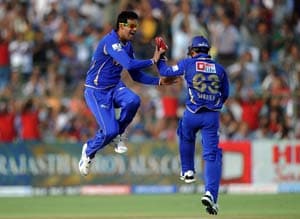 The Delhi Police today told NDTV that arrested Rajasthan Royals players - S Sreesanth, Ajit Chandila and Ankeet Chavan - have confessed to spot-fixing in the sixth edition of the Indian Premier League during their interrogation. However, these 'confessions' are not admissible in the court of law. Earlier, police sources said Chandila has named two more players, both batsmen, who were involved in spot-fixing. The three players along with 11 bookies were arrested from Mumbai on Thursday.

Here are the 10 latest developments in the big scandal:

1. The Delhi Police is interrogating the three Rajasthan Royals players and 11 others in the massive spot-fixing scandal that has rocked the IPL. Delhi Police chief Neeraj Kumar was present at the special cell when Sreesanth was questioned this morning.

2. Police sources allege that Sreesanth has accused Jiju Janardhan of getting him into trouble. Jiju has played cricket for the same Kerala club as Sreesanth. On Thursday, the police released phone transcripts of a conversation purportedly between Jiju and another bookie discussing details of how Sreesanth would allegedly spot-fix in a match against the Kings XI Punjab last week.

3. Sreesanth's lawyer, Deepak Prakash, said there was no direct proof against his client and was emphatic in his rejection of any claim that Sreesanth might have confessed to spot-fixing. "I am very sorry to say that a person who hasn't committed any crime can't confess. For the sake of media also he can't confess. He is an innocent person," he said today.

4. Police sources have also alleged that Ankeet Chavan allegedly broke down while being questioned and admitted to having made a mistake. His brother, however, told NDTV that Ankeet is innocent. "Ankeet struggled to get to where he is. He is being framed. My whole family supports him," Ankeet's brother Nihaar has said.

5. BCCI chief N Srinivasan told NDTV that if found guilty, players would be given strict punishment. He however added that he would wait for the report of the disciplinary committee before taking a final decision. "If what's happened is true, greed has taken over," he said.

6. Among those being questioned today is Amit Singh, a former Rajasthan Royals player who the police suspect was the middleman between bookies and players. Police sources said Singh seemed to have been used as a "talent-spotter" by the bookies, to suggest spot-fixing to his former teammates.

7. Police sources now say all Rajasthan Royals matches in this edition of the IPL are being looked at closely. The police, during their investigations in this case over the last two months have also reportedly found out that bookies hosted a party in Mumbai in mid-April, where they invited six Rajasthan Royals players, but most did not turn up. The police are trying to find out if the players were contacted later by the bookies.

8. Apart from three players and one former player, 10 bookies were arrested yesterday. Six more were detained in Chennai today and the police said at least Rs. 14 lakh in cash has been recovered in searches conducted across the city.

9. The police say they are investigating an alleged nexus between bookies and the Mumbai underworld. The police have, among the hundreds of phone conversations they intercepted in the case, traced some calls to Pakistan and Dubai they say; on Thursday, the Delhi police chief said the "mastermind" of the spot-fixing operation is abroad.

10. Police say the bookies and players had an elaborate process of signals and codes to indicate that a player would bowl a fixed over next, allowing bookies to place bets. In the case of Sreesanth, they alleged, that signal was a towel tucked into his waistband just before he began to bowl an over in the May 9 match.

Comments
Topics mentioned in this article
Cricket IPL 2013 BCCI Sourav Ganguly MS Dhoni Ankeet Chavan Sreesanth Ajit Chandila
Get the latest updates on ICC T20 Worldcup 2022 and CWG 2022 check out the Schedule, Live Score and Medals Tally. Like us on Facebook or follow us on Twitter for more sports updates. You can also download the NDTV Cricket app for Android or iOS.