The young Sri Lankan all-rounder has been in poor form and dropped himself from the playing XI. Pune Warriors languish at the bottom of the IPL table with just two wins from 10 matches. 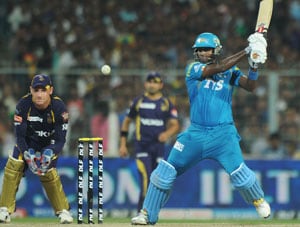 Angelo Mathews has stepped down as Pune Warriors captain. The out-of-form Sri Lankan has admitted that he was relinquishing his position because his spot in the playing was uncertain.

In a statement, Mathews said: "I would like to confirm that I have decided to stand-aside as Pune Warriors franchise captain for the rest of the current season to ensure team leadership continuity.

"It is in our best interests that the captaincy is not switched frequently as we strive to achieve the best balanced team for each different opponent. Given that Aaron (Finch) is likely to play in all our remaining games then it is logical that he continues to be our captain."

Pune have had three captains this season. When Mathews dropped himself, Ross Taylor took over. But it is Finch who has been leading the side. Finch (281 runs at an average of 35.12 in eight matches) is the best Pune batsman in IPL 6.

Interestingly, Mathews was named skipper of Sri Lanka's ODI squad for the Champions Trophy next month.

Comments
Topics mentioned in this article
Cricket IPL 2013 Angelo Mathews Aaron Finch Pune Warriors India
Get the latest updates on ICC T20 Worldcup 2022 and CWG 2022 check out the Schedule, Live Score and Medals Tally. Like us on Facebook or follow us on Twitter for more sports updates. You can also download the NDTV Cricket app for Android or iOS.