IPL has always thrown up opportunities for 'Cricket Honeymoon', and one doesn't have to look beyond AB de Villiers and Michael Clarke for examples. 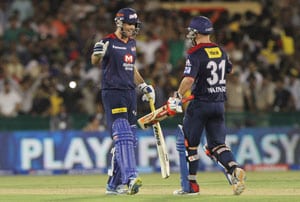 Crisscrossing the vast country and plucking off spectacular catches in the ongoing Indian Premier League (IPL), Delhi Daredevils' Australian batsman Ben Rohrer is taking some time off to get hitched.

The Aussie, who came in as a replacement for the injured Jesse Ryder, has taken a couple of days leave to get married and will be missing Daredevils' next game against Sunrisers Hyderabad on Saturday.

He is expected to come back with his wife before the away game against Rajasthan Royals in Jaipur.

Rohrer, who took a stunner to remove Kolkata Knight Riders' Jacques Kallis on Wednesday, was congratulated by a few people at the Raipur airport as he got ready to board a flight to Delhi, from where he is supposed to take a connecting flight back to Australia.

IPL has always thrown up opportunities for 'Cricket Honeymoon', and one doesn't have to look beyond AB de Villiers and Michael Clarke for examples.

De Villiers got married to his girlfriend, Danielle Swart, days before the start of the last edition of IPL, while Pune Warriors' Clarke flew back Down Under to tie the knot with girlfriend, Kyle Boldy, during the business end of the tournament.

Athletes getting hitched in the middle of sporting events, obviously, goes beyond cricket.

During the high-profile Euro Cup in England in 1996, Czech midfielder Vladimir Smicer was allowed by his coach to go back and get married after they defeated France in the semi-finals.

Two days before the final against Germany, Smicer got married to his long-time sweetheart Pavlina in front of thousands, who had gathered at the Old Town Square in Prague.

Comments
Topics mentioned in this article
Cricket IPL 2013 Michael Clarke AB de Villiers Ben Rohrer Delhi Daredevils
Get the latest updates on ICC T20 Worldcup 2022 and CWG 2022 check out the Schedule, Live Score and Medals Tally. Like us on Facebook or follow us on Twitter for more sports updates. You can also download the NDTV Cricket app for Android or iOS.