Yusuf Pathan, as he himself admits, is lucky to have Gautam Gambhir as his captain but needs to step up a gear if he still harbours dreams of making it to Team India. 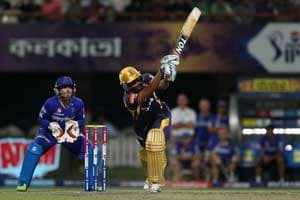 "I am fortunate to have a skipper like Gambhir. He has been a constant source of support for me and continuously backed me when I was not performing well. He has handled me well," were Yusuf Pathan's comments when Kolkata Knight Riders had beaten Rajasthan Royals as the dasher scored a blistering 49* at the Eden Gardens on May 3.

That was barely a week ago. His 3 off 6 balls against Pune Warriors on Thursday though again highlighted his troubles this season. Flattering to deceive has been his story. Just 193 runs in 13 matches at an average of 21.44 in the Indian Premier League 2013, even as an "impact" player as Gambhir has regularly mentioned, is way too disappointing for a batsman of his calibre.

But the KKR skipper keeps backing the inconsistent Pathan despite another low. Ryan ten Doeschate and Rajat Bhatia ensured that the team scored enough to romp home but Yusuf's form is surely a bit worrying.

"It is disappointing that Yusuf is not getting runs," Gambhir said. "I believe he is more disappointed than all of us. After all, he is an impact player. I am sure he will return to form in the coming matches of the tournament."

While Gambhir was "happy and relieved" with the win, he said that Knight Riders could do much better. Ten Doeschate agreed with his captain. "I don't think we have done particularly badly this year," he said. "I just don't think we have won crucial moments of the game."

Comments
Topics mentioned in this article
Cricket Shoaib Akhtar Gautam Gambhir IPL 2013 Yusuf Pathan Kolkata Knight Riders Ajaysinhji D. Jadeja
Get the latest updates on ICC T20 Worldcup 2022 and CWG 2022 check out the Schedule, Live Score and Medals Tally. Like us on Facebook or follow us on Twitter for more sports updates. You can also download the NDTV Cricket app for Android or iOS.