Currently, MI are fourth in the table with 12 points from 6 wins out of 10 games. They have won all their four matches at the Wankhede Stadium till date. 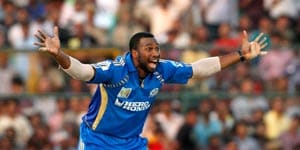 Hard-hitting West Indian batsman Kieron Pollard on Friday expressed confidence that Mumbai Indians can make it to the play-offs in the Indian Premier League by winning their next two home games at the Wankhede Stadium.

"For me, personally, it has been an okay season. Obviously, we are not winning as we want to. There are six more games and we need to win a couple of more games in order to qualify for the last four. So we are working at that. Come weekend, we can get two wins at home," Pollard told reporters on the sidelines of the Adidas' "Meet and Greet fans" event.

He was referring to the home games MI have against table toppers Chennai Super Kings on May 5 followed by the match against holders Kolkata Knight Riders two days later.

Currently, MI are fourth in the table with 12 points from 6 wins out of 10 games. They have won all their four matches at the Wankhede Stadium till date.

"We are not having the best of the seasons, but we are in the top four. And that is all that matters at the end of the day. It's about being in the top four and qualifying for the semi-finals and hopefully into the finals. Hopefully it clicks at the right time.

"The guys are coming into form. We are playing some pretty good cricket. We have two home games (this coming week), so hopefully we can do well at the Wankhede," he added.

Despite being a strong team, MI have never won the title and Pollard said this year they have a better shot at it.

"Yes. Obviously six years on it (IPL), but Mumbai hasn't won. But at the end of the day, its a sport. Just because you have a good team and good players doesn't mean you are entitled to win. You still have to go out there and perform.

"It (performance) hasn't been as we wanted but we have a very good chance each and every year. This year has been an even better chance. We have seen glimpses of what we can do and hopefully we can continue with it at the right time," the 25-year-old said.

Pollard termed Australian captain Ricky Ponting's decision to drop himself from the team as a brave one.

"He is a class player and he has proven himself on the international scene for so many years and nothing can beat experience. Having said that, it's a team of 11 and only four foreigners can play. I think he took a brave decision and brave call and hats off to him. Hopefully we can go out there and perform well," said the 25-year-old Trinidadian.

When pointed out about his struggles with the bat in the last couple of games, Pollard said it was not easy to hit sixes at will.

"It hasn't gone as I wanted to in the last two games. When you look at the other individuals, they tried to bowl well. This is sport. I wish I could just walk out everyday, just give me a ball and I could hit it for six. But it doesn't happen like that."

Asked if he could give a performance similar to what his West Indian teammate Gayle has delivered for Royal Challengers Bangalore, Pollard said he doesn't get the opportunity to score as many runs as the Jamaican opener since he bats lower down the order.

"What sort of tsunami do you think you can get in three overs ? Chris is an exciting batsman, he is an opening batsman, he gets the opportunity each and every time to start the innings and he knows how to go about building his innings. He is a world class player.

"For me, it's not about a Pollard tsunami, it is about Mumbai Indians winning and Pollard contributing to the Mumbai Indians' win. Whatever is necessary in the situation I am put into, I am going to try and do my best," he said.

"Cricket is a team sport, it can't be about me, and it is about a team. It is about the 11 individuals going onto the field in order to do well. I am a middle order batsman. For me if it is to make 20 off 5 balls and it helps the team to win, I am willing to do that," he added.

The big West Indian has caught some of the most breathtaking catches on the boundary line during his stints in IPL and he said the entire MI team takes pride in its fielding.

"We have one of the best fielders to have ever played the game as our fielding coach (Jonty Rhodes) and obviously we have to live up to his standards and try to better it. Not only in this season have you seen catches like that. Fielding is very important in cricket and especially T20 cricket, the amount of runs you save. We pride ourselves on our fielding," he said.

Asked about the current state of West Indies in Test matches, Pollard said the team should aim to improve its performance in One-day cricket first and then replicate it in Tests.

"I can't talk about Test cricket, because I haven't played (in it). But it (improvement) will happen. It has to start somewhere and it obviously started at T20 version. Hopefully, we can try and get better at one-day cricket and then transform that into Test cricket."

Comments
Topics mentioned in this article
Cricket IPL 2013 Jonty Rhodes Ricky Ponting Kieron Pollard Mumbai Indians
Get the latest updates on ICC T20 Worldcup 2022 and CWG 2022 check out the Schedule, Live Score and Medals Tally. Like us on Facebook or follow us on Twitter for more sports updates. You can also download the NDTV Cricket app for Android or iOS.