Suresh Raina said that Chennai Super Kings were probably expecting 140-150 but with such a great start, then a bit of luck in the middle overs and flourish at the end got them to such a commanding total. 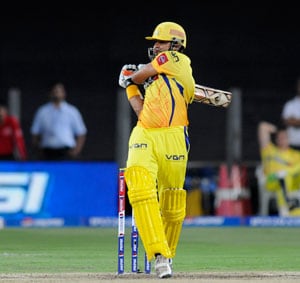 Suresh Raina says he is not disappointed about missing a century in the IPL game against Sunrisers Hyderabad that his team Chennai Super Kings won by 77 runs here on Wednesday night.

Raina remained unbeaten on 99 off 52 deliveries as CSK set a huge target of 224 for the home team.

Raina said they were probably expecting 140-150. "Vijay and Hussey batted very well in first five overs. We knew then that me, Hussey followed by Dhoni, Jadeja and Bravo can play till the last ball and we can easily score 180. Jadeja batted very well in the last over particularly against Steyn that is why we scored 223," said Raina, who was declared man-of-the-match.

"It was very good wicket to bat on. We played very well. We had a good practice session yesterday. We had open nets and I was batting very well yesterday. I just looked to time the ball," said Raina.

"It is all about belief and commitment," he remarked when asked how CSK bounced back after suffering a crushing defeat at the hands of Mumbai Indians in their last match.

He said the team members, including foreigners and domestic players, were gelling well. "God has been very kind. We have a good franchise as well as coaching staff. We all believe in them and they gave us very good platform. When you have good coaching staff you tend to learn good things from them and execute them in the game."

Comments
Topics mentioned in this article
Cricket Dale Steyn Michael Hussey IPL 2013 Suresh Raina MS Dhoni Ravindra Jadeja Murali Vijay Sunrisers Hyderabad Chennai Super Kings
Get the latest updates on ICC T20 Worldcup 2022 and CWG 2022 check out the Schedule, Live Score and Medals Tally. Like us on Facebook or follow us on Twitter for more sports updates. You can also download the NDTV Cricket app for Android or iOS.