Sunrisers, who scored a fifth consecutive win on home ground, have moved up to third position on the points table. 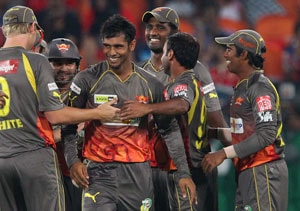 With yet another win at home, Sunrisers Hyderabad see themselves closer to reaching the semifinals of the Indian Premier League.

"Two to three more games and we are there straightaway. We can see the semifinal light burning there. But still I don't want to be overconfident. We will take it match to match," said Sunriers chief mentor Krishnamachari Srikkanth after his team beat Delhi Daredevils by six wickets here on Saturday night.

Sunrisers, who scored a fifth consecutive win on home ground, have moved up to third position on the points table.

Terming the victory "very very convincing", Srikkanth said it was bowlers' day out. "I think the bowlers have done an extraordinary job. Our bowlers have done a deadly job throughout the IPL so far, but in this particular game the line and length they bowled was outstanding," he said

He believes the first two overs by Dale Steyn and Ishant Sharma set the tone as they tied down Virender Sehwag and Mahela Jayawardene.

"Everybody contributed to the success. Everybody was accurate. You can't single out a bowler. They did a great job. It was simply bowlers' day out and if we look from the batting point of view, the way Shikhar Dhawan started, it put them on the backfoot. Quickfire 20 and the match was over then and there itself."

Srikkanth said it was a great feeling and he was overjoyed. He said the team spirit and energy was high. He felt happy for Darren Sammy, who was thrilled over bagging the man of the match award.

Comments
Topics mentioned in this article
Cricket IPL 2013 Sunrisers Hyderabad
Get the latest updates on ICC T20 Worldcup 2022 and CWG 2022 check out the Schedule, Live Score and Medals Tally. Like us on Facebook or follow us on Twitter for more sports updates. You can also download the NDTV Cricket app for Android or iOS.