Suresh Raina not only scored his maiden IPL ton but also crossed 2600-run mark at the tournament to further prove his credentials as a leading T20 player. 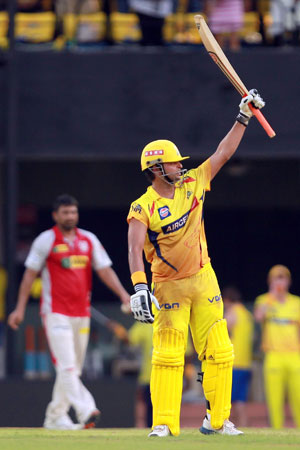 Suresh Raina (100 not out off 53 balls) posted his maiden Indian Premier League hundred at the MA Chidambaram Stadium on Thursday against Kings XI Punjab. It was his second in Twenty20. His previous highest was 98 against Rajasthan Royals at Centurion on April 30, 2009. Interestingly, of the four hundreds by Chennai players at the IPL, three have been recorded at Chepauk!

Following are the other highlights of Raina's feat:

* Apart from Hussey and Raina, the only other Chennai batsman to register a hundred at the IPL is Murali Vijay. In fact, he has recorded two - 127 against Rajasthan Royals at Chepauk on April 3, 2010 and 113 against Delhi Daredevils at Chepauk on May 25, 2012.

* Raina and Albie Morkel have added 74 in 6.2 overs for the fourth wicket - Chennai's second highest against Punjab at the IPL, next only to the 91 between Dhoni and Badrinath at Chepauk on May 10, 2008.

Comments
Topics mentioned in this article
Cricket IPL 2013 Michael Hussey Yuvraj Singh Suresh Raina Kings XI Punjab Chennai Super Kings Pravin Kalyan Amre
Get the latest updates on ICC T20 Worldcup 2022 and CWG 2022 check out the Schedule, Live Score and Medals Tally. Like us on Facebook or follow us on Twitter for more sports updates. You can also download the NDTV Cricket app for Android or iOS.