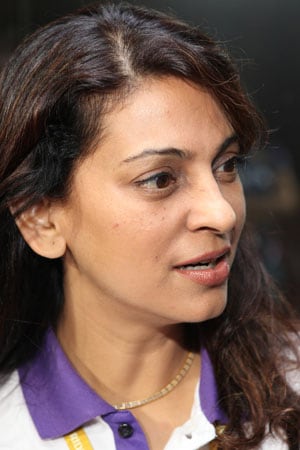 Kolkata Knight Riders co-owner Juhi Chawla feels the cricket career of S Sreesanth -- one of the three cricketers arrested for alleged role in spot-fixing in the ongoing Indian Premier League -- is over.

"Sreesanth's career is over and it's very sad because he is a good cricketer. What has he done in his naivety and greed," Chawla said.

Errant Indian pacer Sreesanth and two other bowlers from Rajasthan Royals team were arrested in a post-midnight operation in Mumbai yesterday by Delhi Police for spot-fixing IPL matches for payments of up to Rs 60 lakhs just for giving away pre-determined number of runs in an over.

Chawla, 45, felt the players fell for the money. "I was surprised that something like this happened. I would say they (players) have to be very careful and be very straight if they are to take their career ahead. I think they were tempted, as humans one can be tempted.

"I feel sorry for those cricketers. Anyway it's a lesson and from now on, you know what can happen to you if you are caught," she said.

The arrested cricketers and the bookies had been sent to police custody for five days by a court here for being quizzed in connection with the case.

Comments
Topics mentioned in this article
Cricket IPL 2013 Shoaib Akhtar Sreesanth Ankeet Chavan Kolkata Knight Riders Ajaysinhji D. Jadeja
Get the latest updates on ICC T20 Worldcup 2022 and CWG 2022 check out the Schedule, Live Score and Medals Tally. Like us on Facebook or follow us on Twitter for more sports updates. You can also download the NDTV Cricket app for Android or iOS.