The Kolkata Knight Riders skipper also heaped praise on his bowlers while adding that KKR still have a 'very good chance' of making the playoffs. 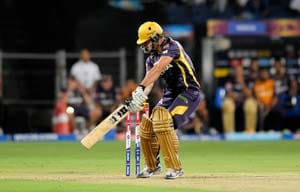 In a battle between two underperforming clubs, Kolkata Knight Riders eased past the Pune Warriors by 46 runs at the Subrata Roy Sahara Stadium on Thursday. Chasing 153 for victory, Pune were bowled out for 106 with L Balaji picking 3 wickets while Iqbal Abdulla, Jacques Kallis and Sunil Narine took two each.

"It was a great effort by the team," said KKR captain Gautam Gambhir after the match. "But all credit must go to Ryan ten Doeschate whose cameo powered us to an excellent total. The wicket wasn't great and Tendo (Doeschate) deserves the plaudits for the way he batted."

Playing his first game of the season, Dutchman Ten Doeschate scored a 21-ball 31 that gave Kolkata a late surge in their batting effort. Man of the Match Gambhir himself posted a half-century, that made him the first player to score 20 fifties in IPL history.

"The plan was to attack from the start and that is exactly what we did. The wicket wasn't the easiest and it took a great effort from the boys to post a 150+ score," added Gambhir.

"It was an extremely professional effort by our bowlers as well and with this victory we are still in with a very good shout to reach the playoffs."

Kolkata are seventh in the table, with 10 points from 13 games - level with Kings XI Punjab.

Pune, on the other hand, are last having lost 11 out of their 13 ties and are rooted at the bottom of the table. Skipper Aaron Finch cut a disconsolate figure at the post-match presentation ceremony.

"We conceded too many runs and the less said about our batting the better. We are to blame for the position we are in and have let ourselves down."

Comments
Topics mentioned in this article
Cricket IPL 2013 Jacques Kallis Lakshmipathy Balaji Gautam Gambhir Iqbal Abdulla Sunil Narine Aaron Finch Ryan ten Doeschate Sreesanth
Get the latest updates on ICC T20 Worldcup 2022 and CWG 2022 check out the Schedule, Live Score and Medals Tally. Like us on Facebook or follow us on Twitter for more sports updates. You can also download the NDTV Cricket app for Android or iOS.