The 32-year-old Badrinath said he looks up to the Aussie, who is now retired after a successful Australia stint which included Test debut at the age of 30. 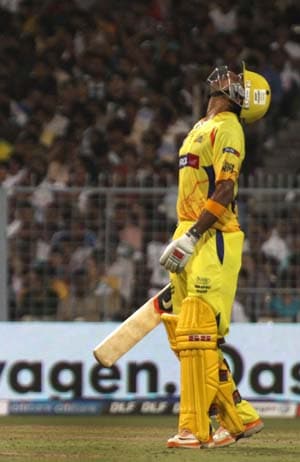 His international career could never take off in the limited chances he got, but middle-order batsman S Badrinath, who is currently plying his trade in the IPL, harbours hopes of becoming a late-bloomer like his Chennai Super Kings teammate and idol Michael Hussey.

Involved in a 75-run partnership with Suresh Raina last night against Pune Warriors, Badrinath's 31-ball 34 was vital in laying the foundation for CSK's competitive total that ultimately proved ungettable for the opposition.

The 32-year-old Badrinath said he looks up to the Aussie, who is now retired after a successful Australia stint which included Test debut at the age of 30.

"Yes, definitely! I take a lot of inspiration from him. He also played late for the country but played really well. He went on to play seven-eight years of international cricket, brilliantly. So I definitely look up to him and I actually idolise him," Badrinath said.

Elaborating on his rapport with Hussey, Badrinath said he often has long conversations with the veteran, nicknamed Mr. Cricket for his devotion to the game.

"I have always had chats with him, pretty long chats. We are similar type of cricketers so it makes more sense to learn from him rather than any other cricketer," said the Tamil Nadu batsman.

"The way he approaches the game, and the way he finishes games is one of the reasons I am not getting to bat. Spending time with him in the dressing room, every moment I always keep learning from him. Not only this year but over the last five years," he added.

Asked what he has gained from his interactions with Hussey, Badrinath said, "I think it is more about enjoying your cricket and backing your strengths and playing your own game."

"I think it is all about innovation, smart thinking and a clear mind. All these things play a crucial part. And even if I don't play for the country, any cricket I play, Hussey tells me to enjoy the game and try to do the best whichever team I play for.

"He (Hussey) plays every match like it is his last, so that is something that I have learnt from him," he said.

Talking about CSK's excellent run so far in the ongoing IPL, Badrinath said the players are focussed on maintaining the team's position at the top of the table.

"We have made it to the top-four but we want to be in the top two if not top. We don't want to take it easy. We want to keep the momentum going.

"This tournament is all about momentum and we want to keep it going. The next thing will be to end up in the top two when you two get shots at the final so that would be the aim for us and definitely keeping the momentum going is very important as well," he said.

Comments
Topics mentioned in this article
Cricket Michael Hussey IPL 2013 Subramaniam Badrinath Chennai Super Kings
Get the latest updates on ICC T20 Worldcup 2022 and CWG 2022 check out the Schedule, Live Score and Medals Tally. Like us on Facebook or follow us on Twitter for more sports updates. You can also download the NDTV Cricket app for Android or iOS.