Royal Challengers Bangalore have suffered four losses in the season so far, and each has come away from home. 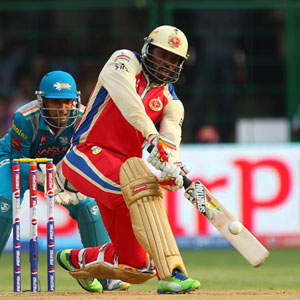 One of the trends that has emerged in the Indian Premier League 2013 is how well most teams have capitalised on playing at home. Stadiums in Jaipur, Bangalore, Mumbai and Hyderabad have each become fortresses for home teams, while visiting teams have found it tough to win at the Eden Gardens in Kolkata and the MA Chidambaram Stadium in Chennai.

Amongst the few unhappy teams to have bucked this trend are Pune Warriors India, who have stumbled badly away and not fared too much better at the Subrata Roy Sahara Stadium in Pune. About the only thing they can count as a positive ahead of their match on Thursday (May 2) is the track record of the team they'll be up against. Royal Challengers Bangalore have suffered four losses in the season so far, and each has come away.

That's about the only consolation Pune have though, because track record or not, they'll find it difficult to forget what happened when they last met Bangalore. Chris Gayle decided that April 23 would be his day, sending the bowlers on a leatherhunt of the kind not seen earlier.

Before running into Gayle a little over a week ago, Pune hadn't had too many wins but some of the matches they lost had been close affairs, and they could at least take heart from knowing that all they needed was a bit of luck and momentum to turn the season around. However, since then, they have lost two more matches, and not appeared close to winning either.

Among the challenges confronting Pune is motivation. From 2011, the team hasn't known anything other than what it's like to be basement dwellers, and even if they win each of their remaining six matches, they'll be up to only 16 points, well aware that in 2012, Bangalore missed out on qualification after being tied with Chennai Super Kings on 17 points.

Bangalore, by contrast, are unlikely to face any problems lifting themselves. Virat Kohli, the captain, has said repeatedly that in spite of the bad away record - the end result is not as bad as it looks, because one of the defeats came in the Super Over and one when an RP Singh no-ball gave Chennai a dramatic win.

But Kohli and Bangalore are well aware that 'what ifs' have the most limited shelf-life in Twenty20 cricket. They'll need to actually start winning away to ensure that the best top-order batting line-up in the tournament makes it through to the final four.

Bangalore have begun the season well, and will back themselves to qualify, having stacked up 12 points from ten matches. A loss against Pune will make things slightly difficult, especially since Bangalore will target a top-two finish, so this is as good a time as any to start correcting a miserable away record.