Sunrisers' skipper Cameron White could not impress on the day getting out for a golden duck but ably led his side to a fine win. With the win, they also inch a step closer to playoff qualification - they just need to beat Kolkata Knight Riders on Sunday. 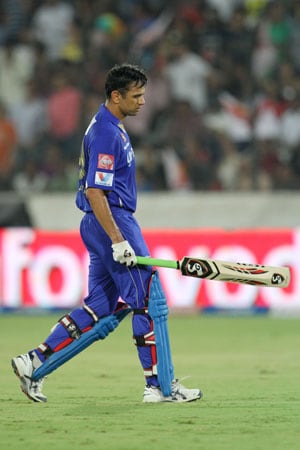 While Rajasthan Royals are already through to the playoff stage but better performance in the last two games might have put them on top of the points-table. Even on Friday, against Sunrisers Hyderabad, they would have fancied their chances but fell short by 23 runs in the end. Rajasthan skipper Rahul Dravid, who confessed pre-match on having a 'tough couple of days', lamented the fact that the team missed a spinner on the day. Ajit Chandila and Ankeet Chavan, both spinners, are in police custody in Delhi for alleged involvement in spot fixing.

"We bowled well to restrict them (Hyderabad) to 136 but were probably a spinner light on the day. And while batting, Amit Mishra was fantastic for them but we got bogged down in the middle overs."

Dravid though, was all praise for James Faulkner whose 5/16 not only helped Rajasthan restrict Hyderabad but also gave the bowler his richly deserved purple cap. He also admitted that Rajasthan batsmen have struggled on low, slow wickets and hoped for better ones in the playoffs.

"In the playoffs we will be a lot better hopefully.. Also hope for better wickets in the playoffs as we have struggled on slow, low ones."

Sunrisers' skipper Cameron White could not impress on the day getting out for a golden duck but ably led his side to a fine win. With the win, they also inch a step closer to playoff qualification - they just need to beat Kolkata Knight Riders on Sunday.

"It is never easy against Rajasthan but we did well here. Roughly 140 was the target we had set in our minds. We knew we were not too far away from a defendable target.. And then we bowled well, fielded well."

He also applauded the 'younger guys' in the team - referring to Biplab Samantray, Karan Sharma and Thisara Perera.

"Credit to younger guys for keeping calm and executing their skill

The Man of the Match, Amit Mishra, who bowled 18 dot balls in 4 overs and took 2/8, was all praise for his team as well as the crowd.

"The team is doing really well, gelling well together. We are getting a lot of support from the Hyderabad crowd too."

He also put down his success this year to hardwork and a change in mindset.

"I have worked hard on bowling after injury. Aggression is the key for me now. Earlier I used to be defensive but now have a wicket taking mindset.. Now I bowl according to the situation."

Biplab Samantray innings of 55 from 46 balls proved crucial in the end as Hyderabad literally crushed Rajasthan. What looked like a tight game at halfway stage, turned out to be quite a lopsided affair. The youngster from Odisha was modest in victory though.

"It is good to play with top players. Since I have played 3-4 matches here, I knew the wicket.. It was slow, low but I adjusted well... Hopefully we will bat well in the later matches but this was a crucial win."