IPL 6: One of those days when things didn't go our way, says Mumbai skipper Rohit Sharma

Moody heaped praise on Dhawan whose unbeaten 73 runs helped the Sunrisers chase down the target of 130 easily. Meanwhile, Mumbai captain Rohit Sharma felt that his team could not click today, particularly in batting. 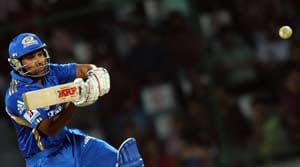 Sunrisers Hyderabad Tom Moody on Wednesday credited his side's easy seven-wicket victory over Mumbai Indians in the IPL here to team effort, saying that his players could execute the plans in bowling as well as in batting.

"I am pleased the way we played. Last few weeks, we are trying to complete our game. We knew that our batting needed to improve. The way our players responded today, I could not have asked for more, particularly in such an important game against Mumbai," Moody said at the post-match press conference.

"We talk about the plans and actually executing them on the field. Today, we managed to do that. We talked about finishing off innings, the death bowling was good," he said.

Moody said the two partnerships Shikhar Dhawan had with Kumar Sangakkara first and then with Hanuma Vihari played a crucial role in the victory.

"We got two good partnerships tonight. Kumar Sangakkara batted really well. Vihari also responded very well. It was not a one man show. Those two important partnerships gave us the convincing win," he said.

Moody heaped praise on Dhawan whose unbeaten 73 runs helped the Sunrisers chase down the target of 130 easily.

"He (Dhawan) is a class player. He is an asset to us. If you get a top order player play right through the end, that to me is very important," he said.

Meanwhile, Mumbai captain Rohit Sharma felt that his team could not click today, particularly in batting.

"I thought we did not bat really well. Probably, 10-15 runs short. You have to give credit to Sunrisers bowlers. I thought they bowled pretty well. They stuck to their plan. It was one of those days when our batting did not click. In the last nine games, we scored more than 70 runs in the last five overs. But today was one of those days on which things did not go our way," he said.

Replying to a query, Sharma said, "I don't believe too much on home advantage. There is an advantage in playing under home conditions. You know the conditions well. But whoever plays better cricket on a given day, wins a game. They played better cricket than us today, so they won. As simple as that."

"Shikhar Dhawan batted really well. He batted like a mature guy. It was not aÂ  big total. He took his time and played accordingly," said Sharma.

Asked about the wicket in Hyderabad which has seen generally low-scoring matches, he said, "We knew and talked about it. The average score here is 130-135. Again, we could have done little better with the ball also. But, you cannot expect the bowlers to come and defend such a small target. I thought they bowled really well. They came back and it was not a day today."

Asked about Kieron Pollard's condition as he fell while fielding, Sharma said he has to find out about it.