"In a years' time the hair on my head will become grey as well," said Kohli after a thrilling 4-run victory over Delhi at the Feroz Shah Kotla. 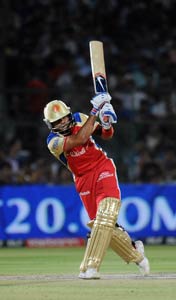 The Royal Challengers Bangalore have made a habit of thrilling last-over finishes in the sixth edition of the Indian Premier League. Friday night was no different as Bangalore beat the Delhi Daredevils by 4 runs. After posting 183/4 in their 20 overs, the visitors had to rely on Jaydev Unadkat - who took 5/25 - as Delhi finished at 179/7.

Skipper Virat Kohli was the star with the bat for Bangalore as he scored a career-best 99 and was involved in a 94-run stand with AB de Villiers. "It was my day with the bat. I was executing my shots well and was lucky at the start of my innings," said Kohli at the post-match presentation ceremony.

Before Kohli opened his account, he edged a Morne Morkel delivery to the wicket keeper. However the umpire signaled a no-ball and Kohli survived to take his side to a daunting total.

"I thought I was gone, until I saw the umpire's arm. It was my lucky day but yet another nerve-wracking finish for us," he added.

Former India skipper Sourav Ganguly had said that captaincy makes 'you grey quicker' and Kohli could not help but agree. "My beard is greying already. And I wouldn't be surprised in one years' time if the hair on my head greys as well."

Kohli was also all praise for the crowd at the Feroz Shah Kotla in Delhi, who gave him a standing ovation for his knock of 99. "This is my home ground and I love playing here. I have always done well in Delhi and the crowd is great," added Kohli.

Delhi Dardevils, on the other hand suffered their 10th defeat of the season and a change in captain didn't work either. Mahela Jayawardene played, but did not captain the side, with David Warner deputizing for the Sri Lankan.

"It was a disappointing day for us," said Warner after the match. "Jaydev was the difference between the two sides and all we can do now is play with a smile on our face."