Amit Mishra and Ishant Sharma made the most of a sluggish pitch to keep Mumbai's attacking reputation with the bat, in check, while Shikhar Dhawan never let the visitors in with any chance with his brilliant fifty. 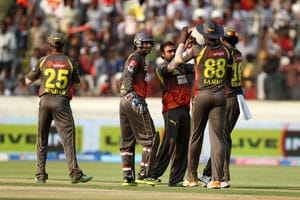 Mumbai Indians managed to cling on to the fourth position on the Pepsi Indian Premier League 2013 table on Net Run Rate, but Sunrisers Hyderabad caught up with them in points earned after a comprehensive seven-wicket win at the Rajiv Gandhi International Stadium in Uppal, Hyderabad on Wednesday (May 1). Mumbai were restricted to 129 for 4 and then, with Shikhar Dhawan playing the lead role, Hyderabad overhauled the target with 12 balls to spare to leave both teams with 12 points, the same as Royal Challengers Bangalore and Rajasthan Royals. (Scorecard)

Ishant Sharma was in the thick of the action soon after the start of the match, playing a part in all that was good and not so good from Hyderabad's point of view after Mumbai won the toss and batted on a sluggish pitch. (Match stats: Mishra leads IPL wicket tally, Sunrisers invincible at home)

Ishant bowled an outstanding first spell of three overs. In his second over, a maiden, he castled Sachin Tendulkar for 14 and had Dinesh Karthik caught at point for a duck. During the same spell, he bowled a front-foot no-ball and had the Free Hit smashed for a six by Dwayne Smith and, later misjudged a sitter from Smith off Amit Mishra at the long-off boundary, tipping the ball over the ropes for another six in the process. (Also see: Match in pics)

The quality of Ishant's bowling can be measured from the fact that despite the Free Hit six, he finished with 2 for 15 from four overs.

Along with Ishant, Karan Sharma and Mishra, the two legspinners, bowled beautifully too, sticking to immaculate lines and turning the ball appreciably. So tight were they that Smith's 38 took 40 deliveries and Rohit Sharma only managed a run-a-ball 22. (Also read: Dhawan says patience was the key) 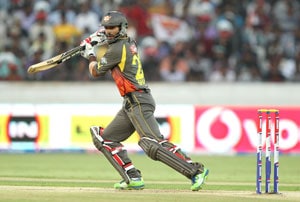 Mishra eventually accounted for both of them. Rohit, who couldn't get enough elevation in his lofted drive, holed out to Ishant at long-off. Then Smith was made to look a bit foolish when he ended up in an awkward position on the floor trying to sweep and was adjudged lbw, though replays suggested the ball had brushed his gloves first.

Dale Steyn pitched in with a great spell towards the end and it took Ambati Rayudu, who made an enterprising unbeaten 27-ball 34, and Kieron Pollard, who made 14 from 19, to hit 16 runs off the last over bowled by Thisara Perera.

The second half belonged entirely to Dhawan. Sensible batting was the order of the day in what could have been a tricky chase, but Dhawan buckled down and played a beauty. Nothing was hurried about Dhawan's batting. Timing was the key, and it looked like the vagaries of the pitch only existed for the other batsmen.

Akshath Reddy fell to Mitchell Johnson for seven and Kumar Sangakkara, who had an ideal platform to return to form, was out caught and bowled by Harbhajan Singh for a 21-ball 21.

Dhawan didn't need any help, though Hanuma Vihari gave him quiet company with a 23-ball 25 before falling three short of the target. Dhawan hit boundaries to all parts of the ground and his only six was a beautifully timed drive over cover off Harbhajan which showed how batting quickly in Twenty20 cricket isn't all about agricultural strokeplay. Dhawan made an unbeaten 73 from 55 balls, an innings that gave Hyderabad their fourth successive win at home.