A shift in venue, from the Feroze Shah Kotla in the capital to the Shaheed Veer Narayan Singh International Stadium in Raipur, was followed by a dramatic shift in fortunes for the Daredevils. 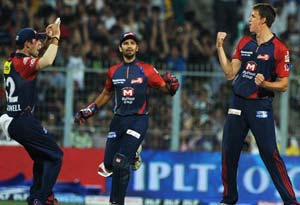 Far-fetched it may sound but two successive wins in the ongoing IPL, following a string of defeats, have opened up a window of opportunity for Delhi Daredevils to "sneak into the playoffs through the back door", feels pace spearhead Morne Morkel.

"Now we are playing winning cricket and entertaining cricket. You never know what can happen with that -- we can even sneak into the playoffs through the back door," Morkel said.

He, though, was candid in his admission that the team was not performing in the first half of the tournament.

"Throughout the tournament, the atmosphere in the dressing room has been positive. We know we didn't do well in a few areas and we are trying to do better in those."

A shift in venue, from the Feroz Shah Kotla in the capital to the Shaheed Veer Narayan Singh International Stadium in Raipur, was followed by a dramatic shift in fortunes for the Daredevils.

"It is nice to have a bit of momentum. And if we try and do our basics as best as possible, we can keep it up. We have got ourselves to blame that we had a low start to the tournament. But I think the most important thing right now is to enjoy and try and play good cricket," the South African was quoted as saying by the IPL website.

On his economy rate so far in the IPL, he said, "The whole tournament I have been bowling well. It was important for me to stick to the basics and make the most of the conditions and back myself. If I do that, I perform the way I did (against Kolkata Knight Riders last night)."

Morkel appreciated the Raipur crowd and called it a great "venue".

"We have come out here and have had two great games. The Raipur crowd has been unbelievable. It is a great venue, a great stadium and hopefully we can play more matches here."

Comments
Topics mentioned in this article
Cricket IPL 2013 Morne Morkel Delhi Daredevils
Get the latest updates on ICC T20 Worldcup 2022 and CWG 2022 check out the Schedule, Live Score and Medals Tally. Like us on Facebook or follow us on Twitter for more sports updates. You can also download the NDTV Cricket app for Android or iOS.