IPL 6: Sunrisers reach the pinnacle with a scrappy win over Kings XI

A flurry of wickets at the end saw Kings XI Punjab gift away their decent position to Sunrisers Hyderabad while Thisara Perera's firing innings sealed it for the home side. 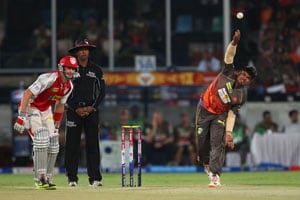 There are days when excellence takes a backseat and two teams do their best to lose a game of cricket. For Sunrisers Hyderabad, who were within one win of topping the points table, and Kings XI Punjab, who were yet to give their Pepsi Indian Premier League Season VI campaign any concrete shape, this was one such game. In a game that was scrappy at best, and much worse for the best part, Hyderabad had enough firepower to chase down 123. (Match in pics)

When Adam Gilchrist, leading Punjab, won the toss and chose to bat, he would have hoped that a change in personal fortunes would rub off onto his team. For a time, it seemed that the long blade was going to cut deep. Gilchrist, now almost halfway between his 41st and 42nd years, threatened to reprise his greatest hits, crashing the ball through the off side with limited footwork and lifting the ball over the on side with sublime timing. But, just as he threatened to play an impact innings, Gilchrist fell for a 25-ball 26. With Mandeep Singh, the other opener, failing to impress, and Paul Valthaty consuming 17 balls for a bumbling 6, Kings XI were sliding. (Watch Analysis: Engineer angry over Punjab's batting collapse)

When the need of the hour was a solid anchor, Kings XI got a middle-order that was long on ambition and short on pragmatism. Every batsman attempted to clear the ropes without having a clear plan and even 22 from David Hussey and a brisk 23 from the promoted Piyush Chawla only left Kings XI at 104 for 5 in the middle of the 17th over. (Stats: 'Purple' Amit Mishra emulates Lasith Malinga)

When the meat of the batting failed, it was asking too much of the tail to wag and Kings XI ended with a sub-par 123 for 9 in 20 overs. (Scorecentre)

On most days, against many teams, this would have been a score that would have been surpassed without fuss. However, the Sunrisers have made it a habit to do as little as possible with the bat, only to have their bowling bail them out.

On the day, all that was needed was a sensible approach, and typically, this was not what followed. Quinton de Kock, opening the batting, was confused by the movement Praveen Kumar got in the air, and edged a ball back onto his stumps via pad. Having lost their first wicket without a run on the board, Hyderabad needed to stabilise, and they did so through Akshath Reddy and Hanuma Vihari, who added 48 for the second wicket. Where Vihari was adventurous, Reddy was compact, but it was Reddy who fell first, well caught in the ring by Azhar Mahmood.

Vihari chanced his arm and played more than one unconvincing shot, and when he fell on 46, chipping Chawla to the cover fielder, a jitter ran through the Hyderabad camp. On a pitch that grew slower and lower, Cameron White was bowled for 16, and when Biplab Samantray was trapped in front to leave Hyderabad at 97 for 5, Kings XI were in with a chance.

Thisara Perera, held back for just such an eventuality, sealed the deal, hitting two humongous sixes off Mahmood to get Hyderabad across the line with seven balls and five wickets to spare.