For Sunrisers, Patel top-scored with 47 off 37 while Dhawan got 42 off 35. Kolkata bowlers tried their level best but a the target was too less to defend. 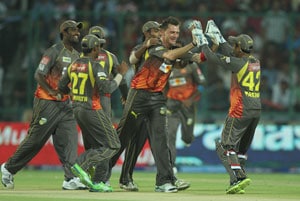 A super show with the ball and a stuttering but competent batting effort by Sunrisers Hyderabad against Kolkata Knight Riders at the Rajiv Gandhi International stadium in Uppal on Sunday (May 19) night dashed the hopes of Royal Challengers Bangalore and took Hyderabad into the playoffs of the Pepsi Indian Premier League 2013. A win by five wickets after restricting Kolkata to 130 for 7 was enough for Hyderabad to seal the deal.
Points Table | Scorecard | Schedule | Stats

The best fast bowler in the world, three medium pacers with a variety of slower deliveries between them, and two legspinners - one classical, the other quick through the air - is what Hyderabad had at their disposal. And that bowling attack combined to defy Gautam Gambhir's pre-match promise of "batting freely" by keeping the Kolkata batsmen quiet for the best part of their 20 overs. Watch: Analysis

Indeed, between Dale Steyn's bouncers, aimed at the batsman's throat at close to 150kph, Anand Rajan's miserly spell of 1 for 22, and the big turn Amit Mishra and Karan Sharma got, there wasn't much Kolkata could do after opting to bat.

Except Yusuf Pathan. Pathan rediscovered his big-hitting form, and his swagger, at the fag end of his three years with Kolkata, and his unbeaten 29-ball 49 was the only reason Kolkata ended with a decent score. No other Kolkata batsman - of the nine that went out - scored at over a run-a-ball. The only other batsman to get some runs was Jacques Kallis, but his 24 came off 29 balls.

Yusuf also triggered the spiciest bit of action in the innings when, after ducking to a Steyn bouncer, he slammed Steyn for a six over midwicket and stopped to applaud his own stroke. Steyn played his part in the game by joining in the applause Soon after, it looked like there would be an altercation between the two as Pathan reached the bowler's end. That didn't happen though and the episode ended with smiles. And Pathan rounded things off with a six off the last ball of the innings, bowled by Rajan.

On a pitch where 135 has been the average first-innings score through the course of the tournament, 130 might not have been a bad total but with Parthiv Patel and Shikhar Dhawan starting brilliantly, it appeared too few. See match in pics

Patel was the initial aggressor, rattling off the boundaries , but once Dhawan got going, the pendulum swung Hyderabad's way. Dhawan hit what was easily the shot of the game - a double-handed slap with both feet off the ground - when he hit Kallis for a six over point. And, by the eighth over, the required rate had come down to around five-an-over.

Kolkata, who had rejigged their playing XI significantly, making five changes, just didn't have the bowling firepower to make a dent. Or so it seemed. With Dhawan (42 in 35 balls) helping Kolkata's cause when he missed an attempted reverse sweep to be caught plumb in front off Iqbal Abdullah, triggering a panic-induced collapse, Hyderabad slipped from 89 from no loss to 112 for 5, Abdullah picking up the wickets of Patel (47 in 37 balls) and Hanuma Vihari on either side of Cameron White running himself out needlessly and then Mohammad Shami yorking Thisara Perera.

But with Darren Sammy hitting two sixes in the 19th over, bowled by the otherwise impressive Abdullah, Hyderabad were home. Samuels pleased as punch