Rajasthan denied Chennai the opportunity to seal a spot in the Indian Premier League playoffs, while boosting their own chances to do so. They also kept a spotless home record, with eight wins in eight matches. 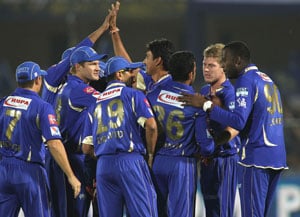 Shane Watson and Stuart Binny combined in a 93-run stand off 45 balls to help Rajasthan Royals beat Chennai Super Kings by five wickets at the Sawai Mansingh Stadium in Jaipur on Sunday (May 12). In doing so, Rajasthan denied Chennai the opportunity to seal a spot in the Indian Premier League playoffs, while boosting their own chances to do so. They also kept a spotless home record, with eight wins in eight matches.

Given the way Rajasthan started their chase of 142, a win looked unlikely. They were three down for 19 after Chennai came out all guns blazing with their pace bowlers. Jason Holder accounted for both Ajinkya Rahane and James Faulkner in the same over before Mohit Sharma had Sanju Samson caught behind.

Rahul Dravid, the captain, and Watson put on a very slow 26, with the primary aim to keep wickets intact. But the runs dried up and the pressure of scoring eventually cost Dravid his wicket, as he tried to cut Chris Morris but only succeeded in edging to Mahendra Singh Dhoni.

It was then that Stuart Binny arrived, and that turned the face of the game. The two set about getting to the target by hitting their way out of trouble. It all started after they lifted three sixes off R Ashwin, in an over that cost 23 runs.

After that, both Dwayne Bravo and Morris were handed a thorough bashing as the asking rate reduced drastically. Watson raced past 50 and ended up with 70 off just 34, with a total of 12 boundaries, six of them sixes. He was dismissed right at the end, but Binny who had matched him almost blow for blow finished things off with his third six to end unbeaten on 41 off 23.

Earlier, Chennai got off to a good start through Mike Hussey and Murali Vijay. The two were solid on difficult pitch as they put on 83. The stand proved the bedrock of the innings. They had taken their time to settle down and get a feel of the conditions. Thereafter, they slowly revved up, as the boundaries increased by number and frequency. Consecutive fours off Watson, both through the covers, started things off. Hussey was excellent at finding the gaps and Vijay found beautiful timing on occasions. They raced past 50, taking 15 off Siddharth Trivedi, as Chennai eased into a good spot, with runs coming and wickets to fall back on.

Dravid then effected a change in the bowling which made all the difference. He tossed the ball to Binny, and in his first over, he had Hussey's leg-stump knocked back. Soon after, Kevon Cooper, returning for a second spell, dismissed the dangerous Suresh Raina, who mistimed his shot and sent it straight to long-on, before dismissing Dhoni, who edged to the slips.

The wickets changed the complexion of the innings and it didn't stop there as Vijay, shortly after scoring his second half-century of the tournament, was run out.

With two overs left though, Chennai gave themselves something to fight for. They were at 116 for 6 when Bravo, given room on the offside by Cooper, smashed three fours, taking 14 in the over. He took 11 off Faulkner's final over, as Chennai ended up with 141.

As it turned out, the target of 142 was no match for Watson.

Comments
Topics mentioned in this article
Cricket IPL 2013 Michael Hussey Kevon Cooper Murali Vijay Chennai Super Kings Rajasthan Royals
Get the latest updates on India vs Australia Series, check out the India vs Australia Schedule for 2020-21 and Ind vs Aus live score . Like us on Facebook or follow us on Twitter for more sports updates. You can also download the NDTV Cricket app for Android or iOS.