The win gives Chennai 20 points in 13 matches at the top while Hyderabad still stay in fifth position with four games left to play. 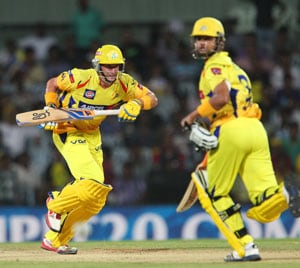 Riding on one of the most spectacular batting displays in the Pepsi Indian Premier League 2013, Chennai Super Kings buried Sunrisers Hyderabad under an avalanche of runs at Rajiv Gandhi International Stadium in Uppal, Hyderabad on Wednesday (May 8).

Chennai's batsmen had an off day in their previous game against Mumbai Indians on Sunday, but Suresh Raina, with an unbeaten 99, and Michael Hussey, with 67 in 42 balls, decimated Hyderabad's usually impressive bowling attack, putting up a daunting 223 for 3 after being put in to bat.

With their confidence completely destroyed in the first half of the game, Hyderabad failed to extend their unbeaten run at home. They slumped to their first loss in six games at the venue by a massive 77 runs after managing only 146 for 8 in their 20 overs.

Though Dale Steyn started proceedings with a maiden over, Ishant Sharma was guilty of failing to complement him. Murali Vijay and Hussey got Chennai off to a flying start, adding 45 runs in just 5.2 overs. Vijay, who made a comeback from injury in the previous game, showed early promise, breaking loose in the last three balls of the fourth over with towering sixes over deep square-leg off Ishant, but Thisara Perera sent Vijay back edging to Parthiv Patel behind the stumps.

Hyderabad's worries, however, were far from over as Raina and Hussey continued to exploit the conditions and some pedestrian bowling. Hussey cut Amit Mishra with panache and hit Karan Sharma for six over long-on, while at the other end, Raina hit a few sweetly-timed shots to extend his good form.

Karan failed to grab a chance at point when Raina was on 27 and it proved be an expensive blunder as Raina made the most of the reprieve, adding 72 more.

Fours and sixes flowed as the Hyderabad fielders looked like they were just waiting for the 20 overs to get over. In a desperate attempt to curb the mayhem, Sangakkara bowled out Amit Mishra, their most successful bowler in IPL VI, by the 15th over. As expected, all hell broke loose after that as Ishant conceded 25 runs in the very next over and by the time Perera dismissed Hussey in the 17th over, the association had amassed 133 runs in 72 deliveries.

Perera was the lone success among Hyderabad's bowlers as he accounted for all three wickets, giving away 45 runs in four overs.

Hyderabad's batting has been the weaker of their suits throughout the tournament and it failed to step up again as the top order tumbled within nine overs. Shikhar Dhawan's unfortunate run out was followed by R Ashwin getting rid of Sangakkara, and when Raina and Mohit Sharma got rid of Hanuma Vihari and Darren Sammy respectively in the space of three deliveries, Hyderabad were in severe strife.

Patel (44 off 30 balls) succumbed to the pressure of the asking rate that had gone past 13 per over and an early finish looked likely at 64 for 5, but Perera and Karan added 35 runs for the sixth wicket to delay the inevitable.

With the win, Chennai have 20 points from 13 matches, and have virtually assured themselves of a playoff spot while Hyderabad still have a good way to go before feeling as secure.