Chasing 191 for victory, no one gave Punjab any chance when they were reduced to 51/3. But, David Miller smashed an unbeaten 101 of 38 balls to take Punjab home with 6 wickets and 2 overs to spare. 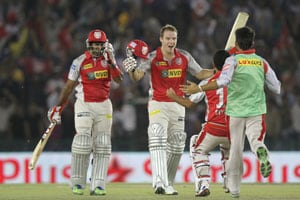 David Miller scored the third-fastest century in Indian Premier League history and single-handedly powered Kings XI Punjab's remarkable chase and keep alive their hopes of qualifying for the playoffs. His unbeaten 101, off just 38 balls, helped Punjab to a six-wicket victory over Royal Challengers Bangalore at the PCA Stadium in Mohali on Monday (May 6). (Match stats: Miller's third fastest ton ever in IPL helps Punjab script highest successful chase this season)

After being asked to bat, half-centuries from Chris Gayle and Cheteshwar Pujara ensured that Bangalore put up 190 for 3. But, in response, Punjab couldn't string together a big enough partnership. Wickets kept falling at regular intervals and the required rate kept increasing. Shaun Marsh was the first to fall, dismissed after a stunning catch by AB de Villiers at short cover. They were two down at 25 after Mandeep Singh was caught behind off Vinay Kumar. (Watch NDTV analysis)

Gurkeerat Singh and David Hussey, the captain, hinted at a fightback with a steady 26. But Murali Kartik trapped Gurkeerat, who had looked in good nick, in front of the stumps and Hussey holed out to Kartik in his next over, as Punjab desperately searched for a big score. (In pics: How Kohli's drop proved crucial as Miller ran riot)

It was then that Miller took charge. Having started slowly, he raced to a half-century off just 24 balls. Boundaries were in free flow in what was a destructive show of batsmanship. He was dropped by Virat Kohli at short cover when on 41, and to say it was costly would be a huge understatement.

The dropped catch seemed to deflate Bangalore, and Miller just carried on, plundering everything and everyone Bangalore threw at him. The required rate, which seemed unattainable for a time, became more than manageable as Miller raced into the 90s. With 19 required, R Sathish, who had been quiet up till then, joined the festivities with three consecutive boundaries. But fittingly, it was Miller who capped things off with a huge six straight over the sightscreen - his seventh six of the innings apart from eight fours. (Also read: Match reactions - 'If it's in the V, it's in the tree. If it's in the arc,it's out of the park!')

Earlier, Pujara and Gayle put up 102 for the opening wicket, with Gayle picking on Michael Neser, the 23-year-old quick bowler from Australia playing in his first match this season. He was hit for consecutive sixes, the first slogged over deep square-leg and then, with feet barely moving, lifted the second high over midwicket.

Pujara then got into the act, hitting three fours off Manpreet Gony in an over which yielded 17 as Bangalore raced past 50 and were in command. However, spin was brought in through Piyush Chawla and the scoring dropped. He bowled all his overs in one spell and went for just 26 runs.

Wickets soon followed. Gayle was bowled by Gony as he tried to pull a short-pitched delivery. Pujara and Kohli didn't last long thereafter either. Shortly after completing a half-century, Pujara mistimed a hit off Gony and the inside-edge found his stumps. Kohli fell to Parvinder Awana, who had bowled a tidy three overs up till then and Bangalore were four down at 144.

However, de Villiers and Moises Henriques launched a late assault to set up the big total. They took 21 runs of Neser's final over, with de Villiers cutting a six over cover, as Bangalore set Punjab a target of 191. As it turned out, even 191 wasn't sufficient.