AB de Villiers' blistering knock was enough for Bangalore to go past Pune despite Robin Uthappa making a match out of it with his brilliance. 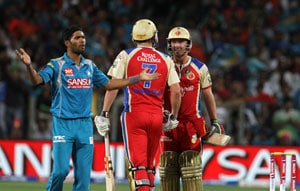 When Pune Warriors India last met Royal Challengers Bangalore in the Pepsi Indian Premier League 2013, they learnt that if Chris Gayle hits the ball, it stays hit. On Thursday (May 2), they figured out that when AB de Villiers decides the ball is there to be hit, he hits it to any part of the ground that catches his fancy. (Watch Analysis)

While Uthappa distributed his runs equally among the opposition bowlers, Ashok Dinda faced the brunt of de Villiers's refined bludgeoning, being hit for 26 runs off the final over of Bangalore's innings after they chose to bat. A good score was always in the offing, but de Villiers, with an unbeaten 23-ball 50, took the total into a winning 187 for 3, enough to complete a 17-run win that broke Bangalore's jinx of not winning away from home this season and consigned Pune to a sixth straight defeat.

Pune would have been forgiven for thinking they had won half the battle when Chris Gayle, who hit that unforgettable unbeaten 175 when the two teams met last, fell to a leading edge off T Suman for 21 in 21 balls to leave Bangalore at 36 for 1 in 6.3 overs. However, Saurabh Tiwary, who opened the innings in a surprise move from Bangalore, and Virat Kohli prevented a collapse with a good 63-run stand. (Also read: Mixed emotions for De Villiers, Uthappa)

At the outset, it appeared that Tiwary had been sent up to provide the impetus at the start, but he ended up playing the anchor. He ended with an important, if slightly sedate, 50 off 42 balls and when he fell, the stage was set for de Villiers to strut his stuff. Moises Henriques, who contributed 27 not out in 13 balls, also played an important part in the unbroken fifth-wicket stand that yielded 68 runs in just 29 balls.

Pune needed their top order to fire, but Aaron Finch (15) and Yuvraj Singh (16) both fell cheaply. Uthappa fought a lone battle, and he wasn't helped by Pune's strange tactic of persisting with Suman at No. 3 ahead of Yuvraj and Angelo Mathews. Suman made 11 off 14 balls, and when he was dismissed, Pune were 46 for 2 in seven overs with the asking rate ballooning to nearly 11 per over. (See Pics)

But Uthappa and Mathews did hit their strides and made Bangalore sweat. Uthappa rediscovered his six-hitting form while Mathews looked in good touch for the first time in the tournament. The duo, particularly harsh on Muttiah Muralitharan, put on 63 in 33 balls before Mathews fell to Vinay Kumar for 32 off 19 - Gayle taking a fine tumbling catch at point.

At 144 for 5 in 16.2 overs, it was all down to Uthappa. The decisive blow was struck by Murali Kartik, who turned one to induce an edge from Uthappa in the 18th over, with RP Singh grabbing the chance.

Pune's resistance ended after that and they ended on 170 for 9, even mathematical chances of them making it to the playoff eliminated in the process.