The South African all-rounder says Delhi are running out of time so momentum now is crucial for them to win two or three on the bounce. 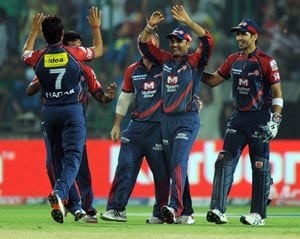 Their six-game losing streak in the ongoing IPL snapped with a victory against Mumbai Indians, Delhi Daredevils left-arm spinner Roelof van der Merwe said his team would look to maintain the winning momentum against Kings XI Punjab here on Tuesday.

"The importance is massive, especially in this tournament where there is a lot at stake. Momentum...it is only 16 games, it sounds like a lot but I mean look at us, we have lost six and we are running out of time so momentum now is crucial for us to win two or three on the bounce and then towards the end you never know we might be in with a chance," Van der Merwe told reporters at the pre-match press conference.

Van der Merwe, who played his first game of the season against MI yesterday said, it was "quite frustrating" to lose six matches on the trot.

"The victory was special especially after the kind of season we had last year. After playing in the semi-final (last year), six losses in a row wasn't what we expected and the kind of good players we have it is quite frustrating. Sunday night was good for our confidence and you might never know we might still pull through," he said.

The South African spinner, who had been waiting to get an opportunity to take the field, claimed a wicket in his first over against MI to finish with figures of one for 35 from his four overs.

Asked about keeping himself motivated before getting a chance to start in the playing XI against Mumbai, he said, "It is hard being an overseas player, who is not a KP (Kevin Pietersen) and guys who are always going to play. You sit on the sidelines and you imagine you will get your chance, and you know you got one game to do well otherwise the change will be made."

"It is really frustrating but at the end of the day it is all about the team winning and whoever plays, whether an overseas player or a local player, it doesn't matter as far as the team is winning," Van der Merwe said.

Asked how the presence of former Pakistani leg-spinner spinner Mushtaq Ahmed in the coaching staff of Delhi has helped him to evolve as a better spinner, Van der Merwe replied, "I think he is an awesome cricket brain and brings a lot of variation."

"I always just thought of bowling left-arm spin but he taught me a few variations that I can use and I think in a modern game it is needed. You need variation. If you look at the best players, such as Sunil Narine, those guys have got a lot of variations and, yes, it very important."

"The difference between South Africa and here are that the conditions here are better for spin bowling. The players also play better over here. I mean, the local Indian players are unbelievable players of spin. They do it every day, back home we don't play spin as well, so it is also easier that way," he said.

Speaking about the role of mentors in the IPL, he said, "They definitely play a big role. You come in with your game plan and the mentor is there to just reassure your confidence, to just back up what you are thinking. They give you little tips that you can use."

Comments
Topics mentioned in this article
Cricket IPL 2013 Roelof van der Merwe Delhi Daredevils
Get the latest updates on Fifa Worldcup 2022 and check out  Fifa World Cup Schedule, Stats and Live Cricket Score. Like us on Facebook or follow us on Twitter for more sports updates. You can also download the NDTV Cricket app for Android or iOS.