Gilchrist's place in the starting XI has been under scrutiny - his 27 on Friday took his aggregate to only 94 from eight innings - but he said he was committed to contributing to Punjab's efforts. 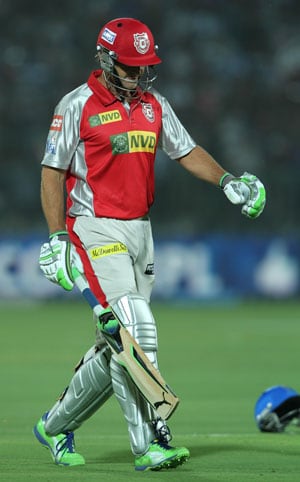 Adam Gilchrist, the Kings XI Punjab captain, ran into a bit of decent batting form and saw his team score 149 for 6 but still lose with almost two overs to spare against Kolkata Knight Riders on Friday (April 26). He said afterwards that it was Eoin Morgan's innings that made the difference in the end.

"We were on even terms for the longest time but Morgan came in and changed everything," said Gilchrist. "He is a wonderful player and had a great day, 150 was a good target to set. But (Manvinder) Bisla batted beautifully, as did Jacques (Kallis). It was still game on till Morgan came in and took it away from us. Our bowlers have done a good job till tonight and the young guys are developing well."

Things could have been different had Bisla, who scored 51 not out, been caught by Mandeep Singh in the second over and Bhargav Bhatt not grounded an easy chance off Morgan when the batsman was on 29. Morgan hit two sixes after that before being dismissed with Kolkata two runs away from the win.

"We didn't help ourselves with those dropped catches," admitted Gilchrist. "Both Bisla and Morgan made us pay. I am happy with our overall performance, but the misses did prove costly. We have to take those chances if we want to perform consistently."

Gilchrist's place in the starting XI has been under scrutiny - his 27 on Friday took his aggregate to only 94 from eight innings - but he said he was committed to contributing to Punjab's efforts. "We look at every player and the package they bring to the field - allrounders, players who bat and ball or bat and keep wickets, and I am no different. I haven't been in wonderful form up to this point, but as I have been saying, I have practiced more leading up to this tournament than I have in any other one. So maybe I should stop practicing," said Gilchrist with a laugh.

"It was nice to get some in the middle of the bat. But yes, you get 20-30 and you're happy but then you get out, so you're never really happy as a batsman. I'll have to keep trying to lift my game and contribute."

The shot Gilchrist got out to came off the middle of the bat, but was caught well short of the boundary - another sign that he is fighting a losing battle? "I am the oldest player in the tournament and I'm not at the height of my powers and I understand that. Everything felt really good today up until that shot. I'm obviously not hitting the ball like I used to in the prime of my career," said Gilchrist.

But, saying that at over 41 years of age he has a "little bit of maturity, knowledge and experience", Gilchrist explained that he realises that cricket isn't all there is to life.

"I'm not shattered by anything. It's not life and death," he said, adding that Men Against Rape and Discrimination, the initiative launched by Farhan Akhtar, the Bollywood actor and director, was the sort of thing that made him realise how there are far more important things in life that runs and wickets. "It's a wonderful initiative that we are all supporting and should be taken very seriously because what we have seen and read about it is disturbingly gruesome and horrible."

Back to the cricket and considering the vantage point he has in terms of looking at the innovative strokes batsmen keep coming up with, Gilchrist was asked if he might have been a different-looking batsman if Twenty20s had been around ten years ago. "I was flabbergasted when I saw Jonty Rhodes hit the reverse sweep, not the dab but the hard smack for six, in 1997. So innovation isn't new but the variety is increasing. I never chose to go that way, you know, like the old dog and new tricks. I was more of a hitter. But it's amazing where they can hit the ball these days - no ball's safe," said Gilchrist with a shake of his head.

At the same time, while complimenting his young teammates - Mandeep, Manan Vohra, Gurkeerat Singh and Harmeet Singh - Gilchrist rued the fact that no Indian youngster had impressed him hugely in IPL VI though, as he said, the "signs are encouraging".